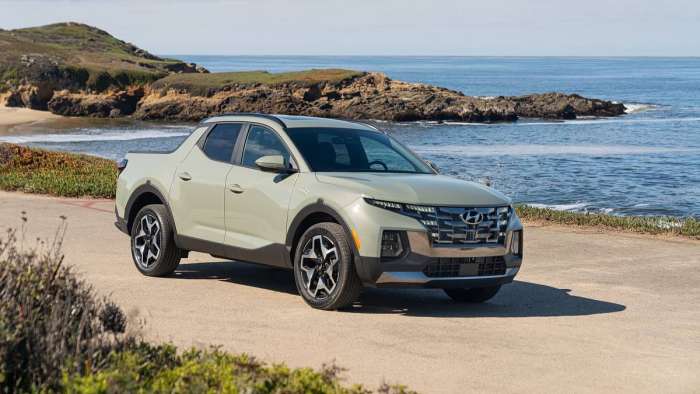 Hyundai has decided to enter the world of pickup trucks With the new 2022 Santa Cruz without following the standards set by the Americans truck makers. In fact, it is more on the side of the Honda Ridgeline that we see the inspiration: to take an SUV and turn it into a pickup truck with amazing capabilities. In this review of the 2022 Santa Cruz Limited AWD, we are looking at the jewelry work Hyundai has done on the design of this truck.
Advertisement

The Santa Cruz is smaller than midsize pickup trucks, which is why Hyundai is calling it a “sport adventure vehicle,” or SAV, claiming it is establishing a whole new segment.

The Santa Cruz is a compact truck that uses a unibody construction rather than the traditional foundations of body-on-frame pickup trucks. This means it shares a basic platform with the 2022 Hyundai Tucson compact SUV, with an almost car-like build.

You might think the Hyundai Santa Cruz is just the 2022 Tucson with a crate, but it's not. You just have to put them side by side to see that they are different. Despite similarities (especially with the LED lights) the Santa Cruz displays more pronounced, more masculine angles. Like other products in the family, the main light units are lower and more discreet, but no less powerful in the evening. Their brightness impresses.

In profile, we discover the audacity of Hyundai. The 20-inch two-tone rims have a rugged look. On the black plastic wheel arches, stylists added texture and, even, the silhouette of the Santa Cruz. On the exterior, Hyundai has managed to keep a dynamic line. 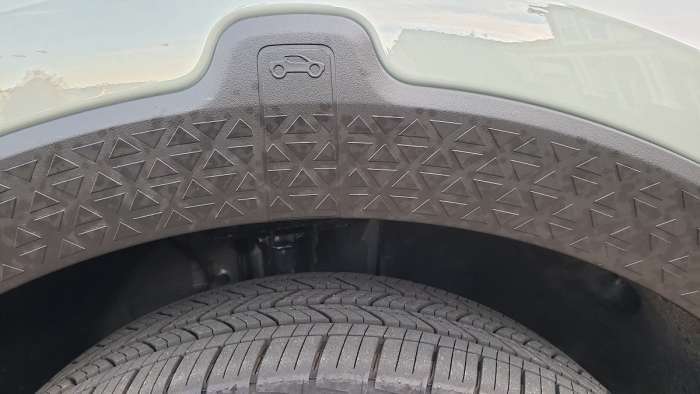 The tailgate of the Santa Cruz comes with a progressive opening. Plus, a metal slatted tonneau cover retracts with the push of a tab. It is useful for hiding objects, but its receptacle takes up a lot of space in the bottom of the crate. 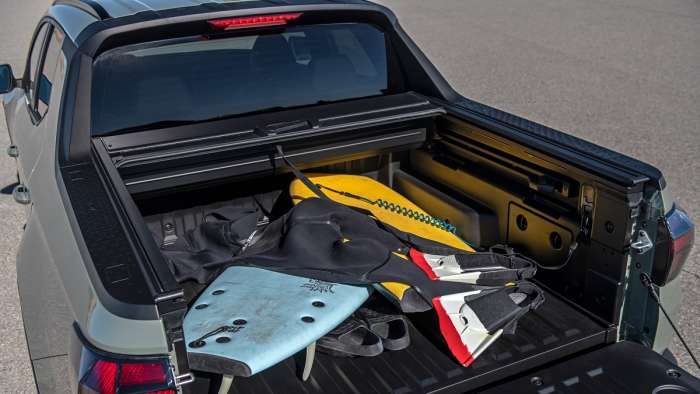 Hyundai, on the other hand, has done its homework when it comes to functionality. There are small boxes in the walls, LED spotlights, rails with anchors and a trunk with a drain. Hyundai isn't reinventing anything, but you quickly realize that the other pickup trucks have been well studied. The Santa Cruz has a body that is 52.1 inches deep, so 4.3 feet. It is not much, but it is more aimed at leisure than work.

SEL comes with heated front seats, lighted sun visors, remote start, and automatic climate control. The SEL Activity brings all of the above plus a power roof, a tarp cover for the rear box and a sliding rear window.

Limited trim ads Blind-Spot view Monitor (BVM), Surround view Monitor (SVM) and several other comfort and convenience options, which I will discuss in this review.

SE and SEL trims have the best mileage with 22 MPG combined, 19/27 City/Highway while the SEL Premium and The Limited trims have 22MPG combined with 19/27 city/highway. 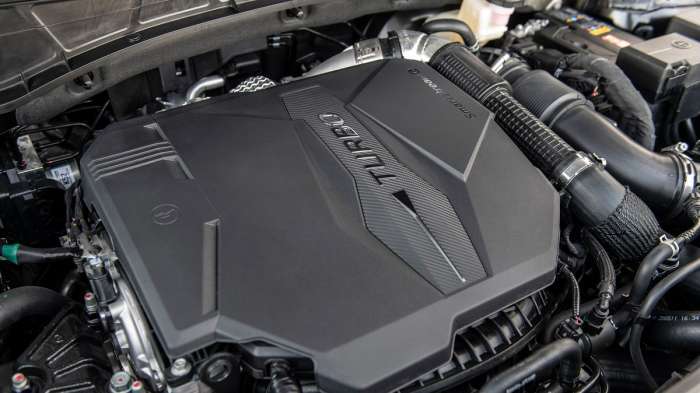 The maximum towing is between 3,500 and 5,000 pounds, which is quite strong and suitable for small boats or two-wheel trailers.

The payload capacity of the 2022 Hyundai Santa Cruz is just over 1,600 pounds and it can tow up to 5,000 pounds, beating the all-wheel-drive Maverick EcoBoost by 100 and 1,000 pounds respectively. The gaps are narrow, but the fact remains that the Santa Cruz is more efficient. The comparison leans in favor of the Ford when it comes to the length of the box, which is 1.37 meters against 1.31 meters for the Santa Cruz. However, both can carry 4x8 sheets thanks to a variety of tricks including molded pockets and other arrangements, not to mention the adjustable tailgate.

You see, Hyundai Santa Cruz's towing capacity is more than enough to compete with the capacity of any midsize truck.

Interior and Technology of the 2022 Santa Cruz

Taken directly from the Tucson, the 2022 Hyundai Santa Cruz's interior layout is both attractive and functional. 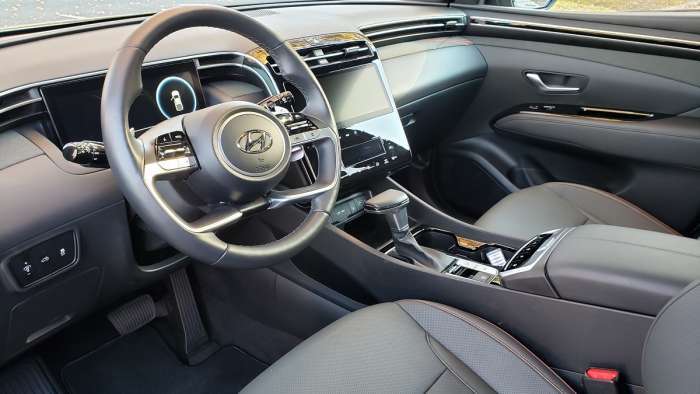 The cabin is quite spacious, capable of accommodating three occupants on the folding bench in the 2nd row. And by "fold-down" I mean the lower seat cushion flips up to reveal additional storage space. All clearances are good except for the more limited legroom. Passengers have told me that the backrest is very straight, without the possibility of adjustment, and therefore rather uncomfortable. Up front, the driver and passenger are comfortable with plenty of space and storage. The person at the helm of the Santa Cruz is entitled to a real shifter, as opposed to the buttons, to operate the transmission - apparently customers like the shifter levers. I am actually very glad Hyundai is going traditional here and offering a real shifter vs buttons. 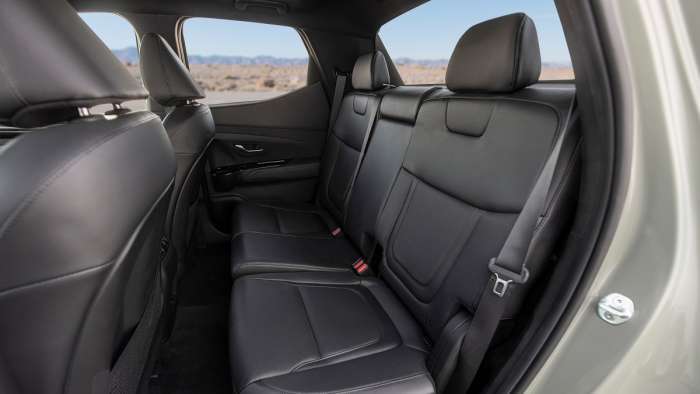 Apple CarPlay and Android Auto wireless connectivity is standard, so you can mirror your smartphone apps on the touchscreen without having to plug it in.

It comes with a navigation-based cruise control system that adjusts to curves in the road and posted speed limits. There is also a high resolution 360 degree parking camera which is a great help when trying to fit into tight spaces.

The Limited receives all the hassle safety warnings and driver aids, which are welcomed by novice drivers. The good news is that some of the driver aids are accompanied by a series of loud beeps and chimes, which, while annoying for a classic driver, are useful and important for many drivers in the age of distracted driving.

Ride quality is excellent. The engine is pretty strong and robust, with quite sporty acceleration, as is its handling and steering, where Hyundai has made improvements in recent years. Transmission shifts are sharp and fast.

Santa Cruz's ride is smooth on rough roads and the suspension soaks up most of the biggest potholes. The steering is responsive and gives you a good idea of ​​what the front wheels are doing at all times. The steering wheel gains some extra drag in Sport mode, but in Normal mode, it's light enough to maneuver through the tightest parking spots with ease.

Generally flat cornering handling is impressive. Other reviewers say unlike a number of body-on-frame midsize trucks, the Santa Cruz is entertaining to drive on a winding mountain road. It has a very smooth ride and there is almost almost no difference between the Santa Cruz and driving an SUV. 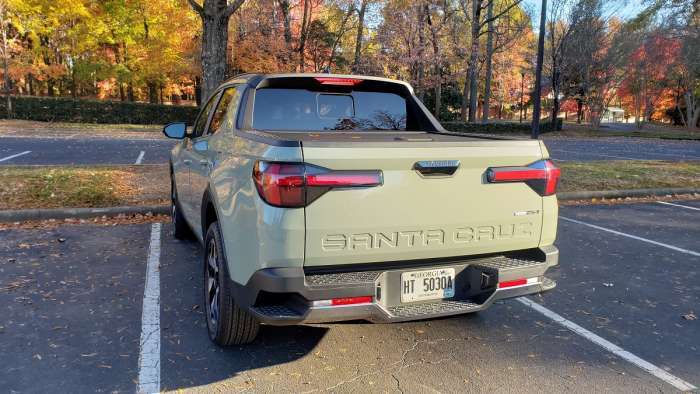 I enjoyed driving and reviewing the Santa Cruz. It gives the impression of being behind the wheel of an SUV, not a pickup truck. I have heard the only other product that offers such behavior is unsurprisingly the Honda Ridgeline. I even found the Santa Cruz to be nicer on the road than the Tucson because of the longer wheelbase.

Regarding the reliability of the 2022 Hyundai Santa Cruz, I can say that Hyundai products are generally very reliable and have gone a long way. Santa Cruz may be a very reliable truck, but it's a new vehicle, new model and thus, patience is in order for the first year of production.

he Hyundai Santa Cruz 2022 was designed to improve Hyundai's position in the small SUV segment, not to generate bulk. It will help develop the brand's image and will be little more than an extension of the Tucson range. It was also created as being versatile for urban use and outdoor adventures.

The Santa Cruz is more of a lifestyle trend vehicle than a true service vehicle. It is not limited, however, but it is not intended to replace a truck. This is in contrast to the Maverick, which Ford presents as an urban vehicle very close to the truck. Therefore, Hyundai does not see the Ford as a competitor, but it is. Additionally, Hyundai believes that a hybrid version is a very real possibility. 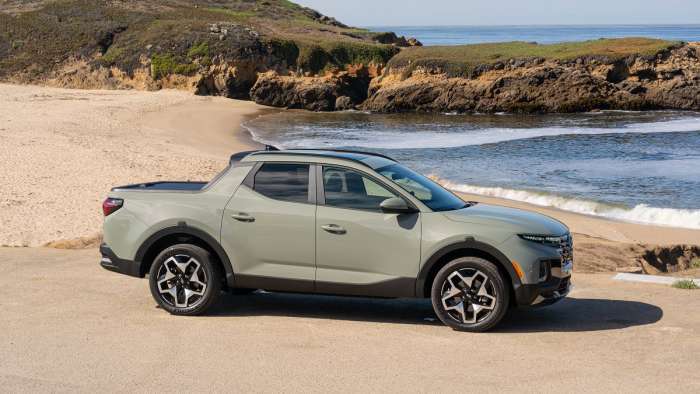 The Santa Cruz offers exciting features, with the comfort of an SUV and the utility of a station wagon. This results in a more comfortable ride than body-on-frame construction, but also results in lower overall capabilities when it comes to off-road driving, towing and hauling. I heard since it went on sale, it has been a success in the Hyundai's dealerships, where according to one report some dealerships have raised the price of each model due to a shortage of units.

LG's New EV Battery Plant Is a Welcome News for Tesla
Tesla Giga Berlin's New Hurdle: It's Not Only the Gov't, but Now Tesla Itself
END_OF_DOCUMENT_TOKEN_TO_BE_REPLACED