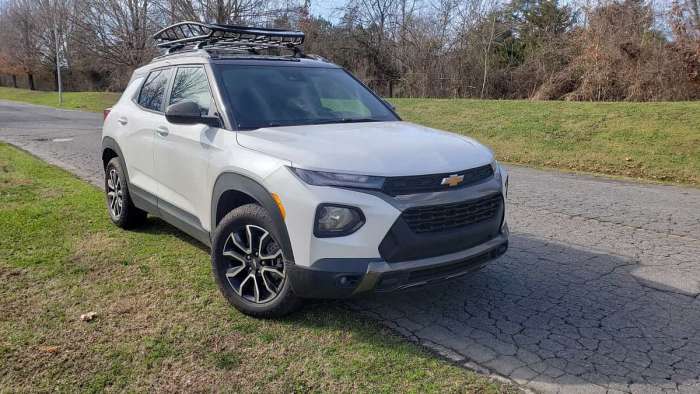 This week I had the opportunity to test out for a week the new 2022 Chevy Trailblazer AWD ACTIV trim, a crossover inspired by the great and updated Chevy Blazer. The Activ trim is Trailblazer's off-road package and gives the vehicle more performance.
Advertisement

The new generation of subcompact size Chevrolet Trailblazer, which started in 2021, is positioned between the aging Chevrolet Trax and the Chevrolet Equinox in the brand's lineup, which now has about seven utility vehicles offered.

The 2022 Trailblazer is a crossover, which is both attractive and at the same time presents a sporty appearance, thanks to the different elements in black applied around its body, including its roof, all of which is enhanced with other extra elements that its different trim levels include.

What's New in The 2022 Chevrolet Trailblazer?

The Chevy Trailblazer lineup received the smallest of changes in the model year 2022. Like I mentioned, this new generation received most of its changes in the 2021 model year. The new things in 2022 are the optional heated steering wheel on the LT trim (standard on the ACTIV and RS trims), and some optional dealer-installed options. For example my ACTIV trim came with roof rack cross rails. A trailering package with a trailer hitch, harness, and bezel are new dealer-installed options. Also, new to 2022 model is that the roster of metallic paint colors also expands to include Crimson, Blue Glow, Vivid Orange, and Mahogany Red.

Different reviewers and authoritative automotive websites list four trims in the 2022 Chevrolet Trailblazer: LS, LT, ACTIV and RS. However, Chevrolet's website only lists ACTIV, RS and LT trims. The website also states that "due to current supply-chain shortages, certain features shown have limited or late availability, or are no longer available."

Thus You have the choice of either three or four different trims. The LS and LT models are the basic liveries while the RS and ACTIV versions have a more distinct personality. For example, on the RS you have dark exterior trims with a hexagonal black grille, an RS emblem and two tailpipes with rectangular chrome tips that add character.

The ACTIV trim of the 2022 Trailblazer offers to go a little further than asphalt with more competent shocks, 17-inch all-terrain tires and higher ground clearance with skid plates. But be careful, you are not in a Jeep and serious off-road trips are prohibited. Its all-wheel drive will allow you to go all the way if not off all terrain. I think you already understood that the ACTIV trim is Trailblazer's off-road package and it was a new addition to Chevrolet Trailblazer lineup since 2021.

With the 2022 Trailblazer Chevy offers two 3-cylinder engines. The smallest, offered only in the most economical LS trim level, is a 1.2-liter Ecotec turbo, with Variable Valve Timing (VVT), direct injection and on / off technology, which works with a continuously variable transmission (TVC). This engine offers 137 horsepower at 5,000 rpm and 162 pound-feet of torque at 2,500 rpm.

The other engine, the one present in the unit we tested, is a 1.3-liter Ecotec Turbo, also with variable valve timing (VVT), direct injection and on / off technology, which works with a 9-speed automatic transmission. This engine offers 155 horsepower at 5,600 rpm and 174 pound-feet of torque at 1,600 RPM.

The model we tested is AWD (All Wheel Drive).

Exterior of the 2022 Chevrolet Trailblazer

This SUV is stylish. It stands out in the automotive landscape and, without a doubt, we immediately notice that it is made for the urban area. Its high beams are placed at the top of the huge central grille, and just below, we find the headlights which also integrate the turn signals. This type of design is becoming more and more frequent among several manufacturers who attack SUVs made for city life. 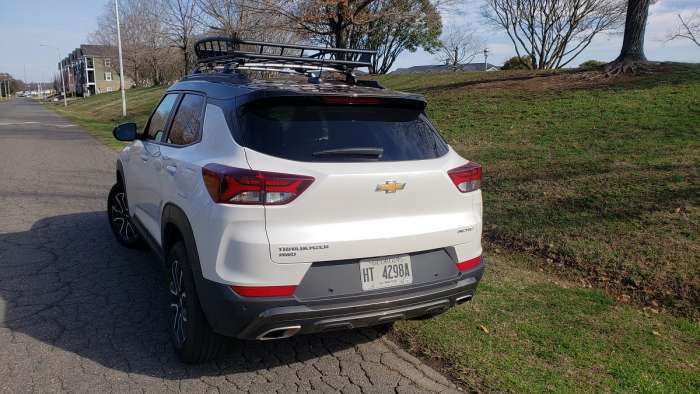 This style is not to everyone's taste, but on the Trailblazer the result is quite pleasant. This model is very attractive and at first glance one can distinguish different exterior elements inspired by the Chevy Blazer. In fact, I hear the exterior of the Trailblazer RS ​​stands out in its market with a more sporty style than that presented by the competition. Its metallic crimson exterior, with a black roof, presents very sharp and angular lines that give it a very special touch. The two tones of exterior color add a more personal look, something that is being seen more and more in the market of crossovers.

The LED lights, which go from the sides and continue to be integrated into the sides of the gate, stand out at the rear. Also looks good the exhaust pipe with double exit with round terminals, integrated in the lower part of the bumper.

The tailgate features the Chevy logo (bowtie) in black with a wide chrome trim, similar to the one seen on the front, just below the hood.

As standard the ACTIV trim comes with 17-inch wheels, made of aluminum, in two tones (black and silver).

The interior of the 2022 Trailblazer does not show much luxury, but having said that, it is not an interior that we can call boring. On the contrary, the interior is an cabin that is pleasing to the eye, even including many plastic elements, since this material in the Trailblazer ACTIV looks good. It also combines perfectly with other accents that the interior presents. 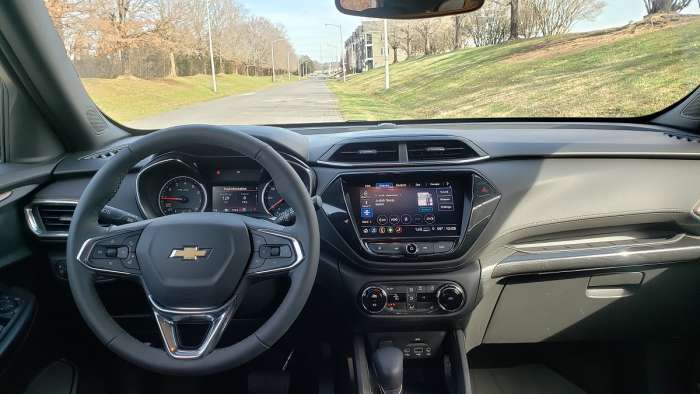 Space is generous at the front and rear for a vehicle of this size. Passengers of the 2022 Trailblazer have no shortage of space either in height or at the level of the legs. Instruments like the radio and air conditioning fall very well to hand and require very little adaptation for ease of use. The traction control, lane monitoring, integral mode and sport adjustment buttons are placed at arm's length at the bottom of the center console. Behind these, a charging plate for a smartphone is present in our ACTIV.

One regret, no active hold button of the vehicle which allows, at a red light, to keep the brakes applied without having to keep your foot on the brake pedal. Once you've tasted this option, you can't do without it. 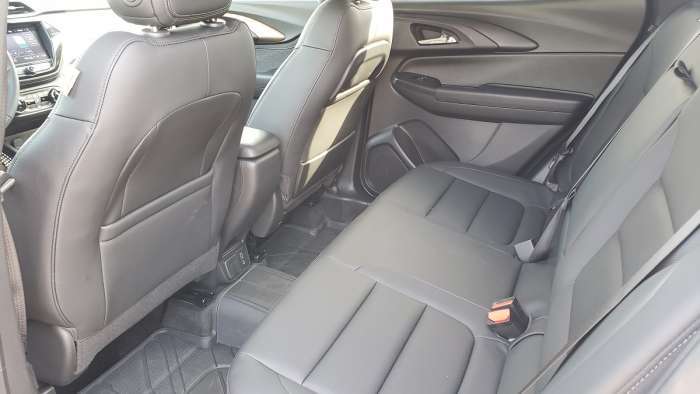 I had one annoyance: there was a noise coming from the outside. It looks like air noise, but this could be a single incident.

The 2022 Trailblazer comes with a 10 airbag system that includes:

Multimedia
The 2022 Chevy Trailblazer includes the latest version of the Chevrolet Infotainment Plus 3 infotainment system, which works with an 8-inch color touch screen (included with the optional Technology package). Without that package, the standard screen is only 7 inches. Android Auto and wireless Apple CarPlay apps are included as standard. The Trailblazer is, to my knowledge, the first in this price segment that offers wireless connection.

Some people think the engine needs more power, but honestly, it was just OK for me and for our family needs. And we did drive here and there a lot.

The suspension is a little stiffer than I would like, but that does not degrade the ride quality and as for the brakes, they respond perfectly to all the tests I subjected them to.

In general, except for the outside noise, I liked driving this crossover and much more its fuel economy, which is one of the best in the crossover market. I think considering the price, this is a great looking vehicle in may ways. 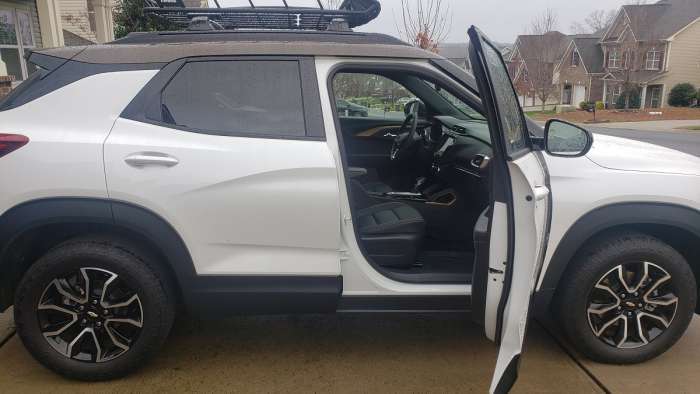 The 2022 Chevy Trailblazer ACTIV trim ​​is a very attractive vehicle, especially when we talk about its exterior. But the interior, despite also has a smooth surface (despite the plastic) and looks great, which gives it a little touch of elegance and makes the interior not so boring, makes it more pleasant.

Despite its small size and three cylinders, I was quite impressed with the 2022 Trailblazer. From the first turns of the wheel, we notice the ardor of the mechanics which does not lack breath at low speed. Its nervous behavior and maneuverability make it a small urban vehicle very well suited to its environment.

Thanks to its on-demand all-wheel-drive system more suited to a snowstorm than an off-road circuit, it won't be surprising to see a lot of them driving in the northern parts of the country.

Admittedly, not everything is rosy and the overall quality on board. The abundance of hard plastic may make some people hesitate between a Trailblazer and a Mazda CX-30 which trades for the same price, while being better finished. But, keep in mind that the small Mazda offers less interior space. These will be among the factors to take into consideration before making your choice.