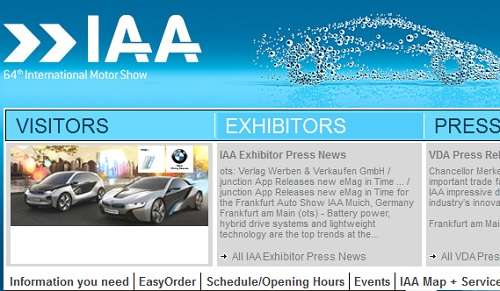 The 64th International Motor Show has always attracted major headlines and while the auto show in Frankfurt opened with great fanfares, there are four distinct trends already apparent in the industry that come to our cars in 2011-2012.
Advertisement

The mode is mixed this year in Frankfurt. Despite warnings about a new recession some CEOs and analysts are optimistic as they believe the current outlook for the automotive market are, overall, much better than two years ago. The Europeans are a little more worried about the outlook for the next few years and they have good reasons to be concerned about the near term outlook of the auto industry in Europe and China.

Yet, the car makers have come to Frankfurt with innovation. An average observer can clearly see four distinct trends at the 2011 Frankfurt Motor Show.

The German car makers, mostly known for their luxurious expensive sedans, in 2011 are demonstrating their ambitions in small city models at the Frankfurt Auto Show. Small cars are the new black in the auto industry and highly coveted. Volkswagen (Public, ETR:VOW), which is the inventor of Beetle and Golf Two small cars focused its presentation on the new Up. Volkswagen Up is the company's smallest model and focuses on city driving. VW was already successful in selling more than 22 million units of Beetle and Golf Two and thinks the new small cars will meet the budgetary restrictions of many city dwellers because of economic difficulties. City drivers are also eager to reduce their greenhouse gas emissions. Mercedes-Benz and BMW are not left out. Mercedes-Benz first presented the rejuvenated Class B and a new prototype electric Smart. BMW presents its Concept i3, the first representative of a new range of electric cars, and new versions of the Mini.

The year 2011 is the year when our cars started to talk to drivers. However, the 2011 and 2012 will also be the years when internet comes to our cars and follows is there. For auto makers this is a must now. Cars, having internet connections on board are in any Frankfurt Auto Show catalogs by BMW and Mercedes-Benz, Swiss Le Matin reports.On-board cabins of the Bavarian manufacturer offer a way to find restaurant or museum, delivers news, weather or other types of practical information. In Daimler, internet is now optional in Class B. In the future cars will offer more: music, movies and documents stored in driver's home computer or hosted on a "data cloud." Ford already suggests this in its prototype "Cloud." The down side of this high tech development in cars is that they make our cars more vulnerable to hackers. There have been number of concerns about this issue in the mainstream media. How can cars' computer systems be protected from hackers, remains a big question.

Gadgets are not new to cars, but we see more and more gadgets and widgets in our cars. Some new gadgets allow cars to park on their own without a driver board. One German high tech company, named Bitkom, has done a study and found out that the services most desired by drivers are the driving aids, such as the ability to find locations of nearby gas stations.

Frankfurt is conscious of the need for clean energy development and also for increasing its share in car manufacturing. Those who have visited Frankfurt should already know about the Plakette. Entry in Frankfurt and in many German cities requires a special environmental badge called Plakette. The Convention Center, where the 2011 Frankfurt Auto Show is held is in the green zone requiring Plakette.

Wind energy and solar panels are beginning to point their noses around the plants of car manufacturers, anxious to sell cleaner cars from production. For example, officials at Daimler think that it won't make any sense to achieve zero CO2 emissions from cars if the company is not holding the same standard during the production process. Germany is the country that has chosen to abandon nuclear energy by 2022. Thus, its auto manufacturers are eager to develop renewable energy. In France, Renault (Public, EPA:RNO) boasts for having launched carbon neutral plant in Morocco. Its industrial waste is recycled, the power comes from wind turbines, steam and heating boilers are supplied by biomass.

Frankfurt Auto Show is open to the public until September 25 of 2011.