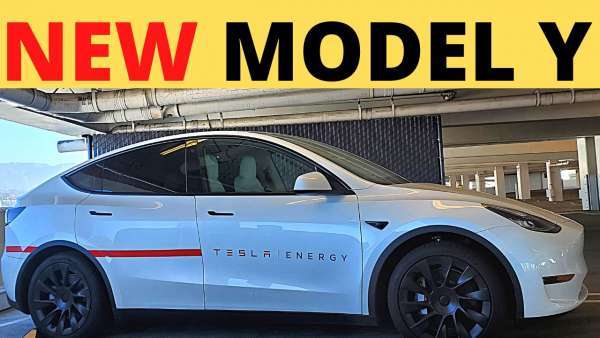 Tesla starts converting its energy fleet to Model Y electric SUVs. Reddit user u/demuhnator saw this new Tesla Energy Model Y charging. He saw others taking pictures, so he figured out he should do and share with the Tesla community.

In a Tesla Energy-wide company meeting obtained by Electrek yesterday, a Tesla manager confirmed that the company has been integrating Tesla Model Ys and Model 3s into its fleet:

"We have been doing a great job working with our vehicle teams to get us into some Model Ys. We already got the first batch deployed across the country in different offices, and our plan is to continue electrification by getting Model Ys and Model 3s to replace every vehicle that they can one for one.

"Looking over the course of this next quarter, we are really going to start getting rid of the Chevys we have in our fleet and some of the Sprinter vans and the other vehicles where applicable to replace them with Model 3s and Model Ys, so that when we install at a customer’s house, we are showing up with a fleet of Teslas."

I think, this is more of a reason for Tesla to actually develop and build a Tesla Van. However, there is only a limited amount of batteries to go around, so tesla is putting them to their most profitable avenue. I think Tesla vans will come, but not for years.

Tesla Contemplates A New Strategy for China Retail even As Sales Boom
Jay Leno on Elon Musk & EVs: “I Think He Should Get ... Credit"
END_OF_DOCUMENT_TOKEN_TO_BE_REPLACED