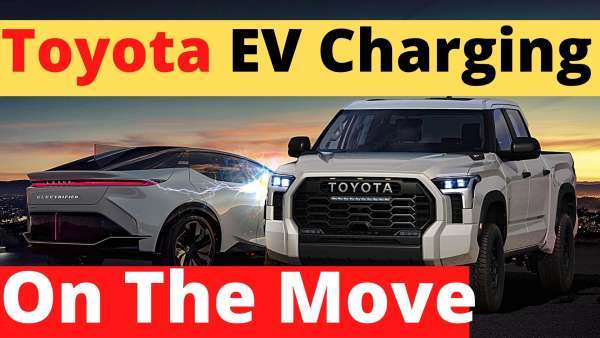 Future Toyota electric vehicles will wirelessly recharge each other on the move, shows Toyota's game-changing EV patent technology. This patent from Toyota hints at a development that could eliminate the worst part of EV ownership.

CarBuzz uncovered one of the Japanese company's U.S. patent applications that suggests they could have some genuinely groundbreaking EV technology in the works.

If Toyota successfully completes finishing the development of car-to-car wireless EV charging on the move it can potentially cure those range anxiety worries.

CarBuzz has just discovered Toyota's new patent. According to patent documents, Toyota is working on a way to wirelessly recharge electric vehicles, and here's the kicker: the invention aims to do this while the cars are still moving.

Here is how it works. "In the first, one car (let's call it an electric Toyota Tundra from the future) could be driving along the highway. The driver realizes that the truck is almost out of juice, so he or she places an 'energy transfer request' over a wireless connection to a second vehicle, say a Toyota Mirai or the production version of the Lexus LF-Z concept.

"Once the request is accepted, 'a second wireless connection from an energy interface on the second [vehicle] to an energy interface on the first [vehicle]' can be established. The requested amount of energy can then be transferred. In other scenarios, the vehicles automatically place requests for energy transfers with each other, potentially through the use of a 'non-transitory computer-readable medium,'" explains Carbuzz.

Also, watch my previous video of Toyota saying EV aren't for everyone and offering some green alternatives.

Tyler Duffy writes in Car Patrol that the vehicle-to-vehicle option would likely be one option as part of a vast charging infrastructure that could include things like mobile chargers roaming highways and roads that do the charging themselves. "One could see embarking on a road trip with a full battery, dispensing and receiving power as needed en route, fast charging when the humans need pitstops, and never having to do the most annoying thing about owning an EV — making a 35-minute stop to recharge to 80 percent," Duffy explains.

LG's New EV Battery Plant Is a Welcome News for Tesla
Tesla Giga Berlin's New Hurdle: It's Not Only the Gov't, but Now Tesla Itself
END_OF_DOCUMENT_TOKEN_TO_BE_REPLACED