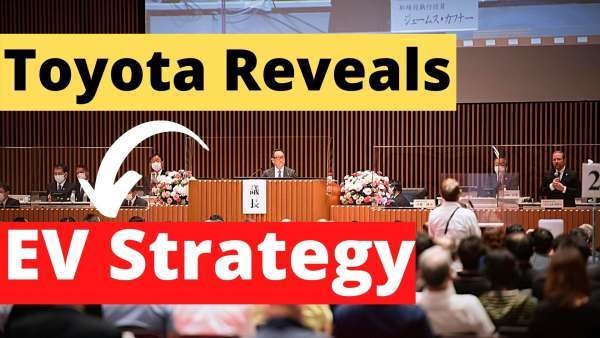 During the meeting, Toyota's Chief Technology Officer Masahiko Maeda said that Toyota reduced the development lead time for the “bZ4X”, an all-new BEV jointly developed with Subaru, by 30% compared to the usual Toyota vehicles. Furthermore, according to him, the company is targeting a 10% more reduction for future new BEVs.

“Shortening lead time results in conducting development with fewer resources and at low fixed costs. This enables us to have flexibility even when faced with drastic changes (such as customer preference and regulations),” said Maeda in May about the benefit of applying TPS in development.

TPS is Toyota's Production System, which is an integrated socio-technical system, developed by Toyota, that comprises its management philosophy and practices. The TPS is a management system that organizes manufacturing and logistics for the automobile manufacturer, including interaction with suppliers and customers.

One of the shareholders asked if this approach was truly effective as he shared his thoughts, “The all-around strategy requires a considerable amount of investment. Wouldn’t it just be better to spend management resources exclusively on BEVs?”

"Toyota is working on a full (all-round) lineup of vehicles for electrification, and I explained this at the announcement of our financial results the other day.

"President Toyoda says customers have the final say. I believe that Toyota has long been building relationships with its customers.

"Using the word “strategy” might make something seem like it’s the main objective, but, as a result of pursuing customer convenience and always responding to customer requests, the cars that Toyota offers have come to form a full lineup.

"I think the same is true in achieving carbon neutrality when considering vehicles that emit as little CO2 as possible.

"Because BEVs are getting a lot of attention right now, they might seem like the only answer to some people. However, when we listen to what our customers have to say, while some people prefer BEVs, it is also true that others find that, with the current technology, BEVs are not yet convenient enough.

"Due to our relationships with our customers from the past, we need to live up to the expectations of customers who have trusted Toyota up until now, and even when electrification becomes a necessary technology for our customers in the carbon-neutral era, we will continue to offer a full lineup.

"We believe that it is best to provide customers with not only BEVs, but also a variety of other options, such as HEVs, PHEVs, FCEVs, and hydrogen-fueled engines."

In other words, Toyota says there is money to be made not only in ICE and BEV, but also in HEV, PHEV, FCEV and hydrogen-fueled vehicles and Toyota, listening its customers, is going to take it.

According to Toyota Times, "no matter how good it is for the environment, if customers don’t choose the technology or product, its environmental impact on CO2 is close to zero. For a wide range of people to choose and enjoy the product, it needs to be practical: something both convenient and affordable to customers."

Toyota’s approach is to accept that there are diverse needs when it comes to different types of car engines, and to strive to offer a variety of convenient and green options for each customer.