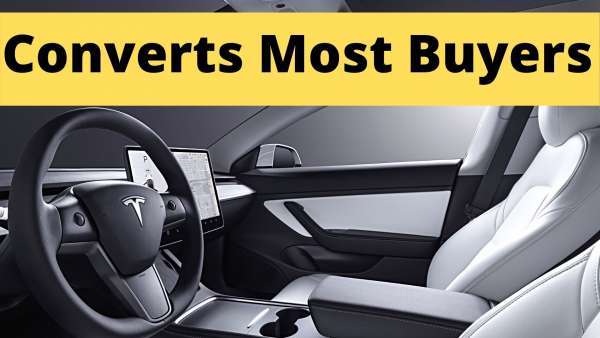 Tesla is the best-selling electric car brand in California with Model Y taking the lead and for the 2nd year running, Tesla converts the most buyers from one brand to its own.

So far Tesla is doing the best job converting car buyers from other brands to its own, according to the latest information IHS Markit presented in its 25th Automotive Loyalty Awards. Last year, Tesla had the highest conquest percentage, which isn't hard to imagine as registrations for new vehicles from Tesla exploded in 2020, as it it sold nearly 500,000 vehicles in and plans to reach almost 1,000,000 productions in 2021.

Tesla also became the winner of the Highest Alternative Powertrain Loyalty to Make. "In other words, buyers again purchasing an electric car or fuel-cell vehicle remained steadfast in their loyalty to Tesla. As we've seen in past studies, not much deters a Tesla owner. Even if a group of owners registers poor quality or reliability with their car, they still enjoy it enough to give the brand a pass," explains Sean Szymkowski in Road Show.

With all this together, Tesla has once again become the best-selling EV brand in California with Model Y as the clear leader in sales. CEO Elon Musk's prediction is coming true and the compact SUV is becoming more popular than its older sibling, Model 3. And this makes sense because the Model Y is wider, bigger, and more appealing, especially to families with children.

According to Cross-Sell Tesla reported record deliveries in Q1 2021, delivering 184,800 units. While the last quarter was not a record for the company in California, it was a record for Model Y here, the sales of which for the first time surpassed Model 3 sales.

Today, following a spate of highly publicized Tesla crashes, Tesla has decided to give owners easy access to data gathered by their vehicles during an accident.