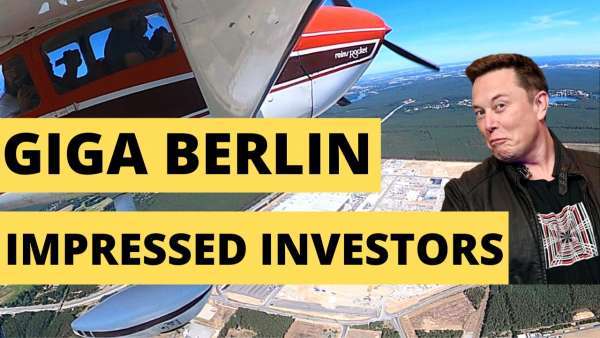 Very recently UBS Jeffries and apparently a group of major investors made a factory tour at Tesla Giga Berlin electric car plant and they were very impressed.

Their analysts shared their thoughts about Tesla, about Giga Berlin and how Tesla's German car factory impressed them.

Jefferies analyst Philippe Houchois wrote “A day of investor meetings and a visit to Berlin’s new plant keep us convinced Tesla is leading industry transformation with a business model driven by resource efficiency."

“Tesla highlighted that Berlin could become the most profitable gigafactory as COGS will get close to Shanghai levels (ie, much better than Fremont) while European product mix will be the highest in the world, much higher than China. We agree with this assessment, which is why we expect auto gross margin to exceed 30% from H2/22 onwards,” UBS noted.

“We were the first broker to get a Giga Berlin tour together with key clients. We saw a very busy factory floor obviously making good progress towards the 5,000 car/week target run-rate by year-end. Parts of the plant are even ready for 1Ok vehicles/week. With a sequence time of 45 seconds by car and 10 hours from the body shop to final assembly, Tesla believes it is more than twice as fast as VW’s MEB plant.

“The key process innovation is Gigacasting, which replaces an army of welding robots for a single rear-end underbody part. By year-end, Tesla plans to do the front-end underbody also as a single die-cast piece with a total of 8 Giga Presses, enabling the use of a 4680 structural battery. Tesla expects to have in-house 4680 cell supply up and running by then next door,” UBS noted.

I think once Tesla starts actively using the Giga Presses at Giga Berlin the rest of the industry will need to go the gigacasting and structural pack route if they want to compete. But you know, IDRA, which builds Giga Press machines for Tesla has probably long-term contracts with Tesla, and there aren't many companies on earth that make giga casting machines. Thus, it is going to be very difficult for other car companies to transition to this method of production anytime soon.