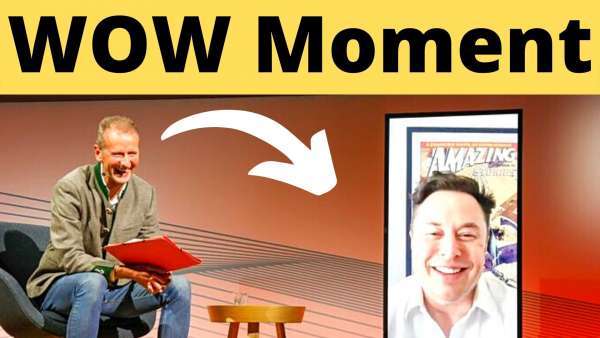 I had a "Wow!" moment when I understood what is happening at Volkswagen’s executive conference, in which Herbert Diess surprisingly dialed Tesla CEO Elon Musk and invited him to address 200 VW top executives. That Tesla and the Volkswagen AG / Volkswagen Group of 16 or so car brands directly cooperate. It catapults the German auto industry, which is huge, from a dark and scary place with no obvious way out to the start of the best way out possible.

This article is a compilation of quotes from the comments of Torque News Youtube Channel under our previous coverage of the topic.

People, think these developments between VW and Tesla, the warm relations between Elon Musk and Herbert Diess may lead to some type of agreement or even a merger. Alan Bartram has commented under Torque News Youtube channel’s previous coverage of this topic and says “A meeting or discussion of this nature is unprecedented- a meeting of the young and the old to dominate the most amazing future development of EVs in some mutual agreement would be an amazing feat- Diess as chairmen and EM as CEO may work.”

I have always had a great deal of respect for Herbert Deiss and am not overly surprised by him inviting Elon Musk into the recent meeting. A merger? Wow the mind boggles as to what the format would be and its impact on the future of the motor industry in general if it happens

It is amazing how Musk is disrupting not only the auto industry but the whole mindset of how companies interact. The idea that cooperation rather than cutthroat competition is the way to go, is really a revolutionary idea. It definitely is smart to keep communications open and friendly because alliances are better than brand wars. I don't think that this means anything like a buyout, but it does reflect well on both Elon Musk and Herbert Diess.

I mean, think about it: VW sells 10M cars every year. If Tesla can sell drivetrain and FSD software to 10% of their fleet, which will generate 10B in additional revenue. Tesla can generate 100B+ in profits by 2030 if this happens and other automakers follow suit.

Legacy car makers weren’t motivated to design more efficient vehicles to up-keep petroleum consumption and hence the value in petrodollars. It isn’t easy for them to turn out efficient EVs in short.

It doesn't surprise me a bit that Elon is sharing his thoughts with whoever wants to listen. Remember that most of Tesla patents are Open Source. There is a reason for it. That goes to show that he genuinely wishes everybody to change to electric ASAP. And it's really good on VW to reach out to Elon Musk.

Elon, I think your approach to cooperate with VW is a very smart move all around and it would naturally benefit both companies in the long run. It would be especially advantageous for VW to do this because without such a special relationship of joint I don’t see how VW can advance and compete.

Mark Chambers, who has commented under our Youtube Chanel, says ‘I'm am not totally surprised this meeting with Elon happened. It sounds like something Elon would be happy to do. It might be a question as to how many of the 200 executives buy into what Elon said. For Diess, this was a great strategic move to help push VW in the right direction, but with the risk of being considered sort of a traitor to the VW company. We will see how that plays out. When you think about it, it is kind of ironic that Diess probably sees Elon as a greater source of helping VW to advance than the internal execs. Since it was made public and likely applauded by media and the public, this may bode well for Diess and VW. In my mind, this could be the key that keeps VW in the market for at least the near future compared to GM, Ford, and others. Imagine if all of the car companies were to work together for an electric future. We would all be winners, everyone. This would be something like Space X, Blue Origin, ULA, and others all working together to build a better path toward space travel and exploration. That is just wishful thinking. At least there might be some hope for more cooperation in the area of sustainable energy.”

Another person has commented under Torque News Youtube channel writing, “As a retired VP of Global Business Development and Electrical Engineer, I always had my business philosophy written on my whiteboard: "Ego's Kill Companies." This meeting proves it! Neither Mr. Diess nor Elon allows egos to get in the way of success and their Mission Statements.”

What happened during Volkswagen’s executive conference meeting was nothing short of REVOLUTIONARY in the world of business. As a businessman myself, I happily 'Take My Hat Off" to both Mr. Diess and Elon Musk.

Overall, I think this is brilliant. That VW can acknowledge their shortcomings and Tesla's success. It's of course the only sensible thing to do. As Toyota and many others are caught napping this is a great opportunity to increase market share if they can accelerate the transition. Everyone seriously moving to EVs is on the same team. The "competition" is really just tryouts for spots. Diess deserves huge credit for not indulging his board in self-delusion that there is any way forward at this time but drafting in Tesla's wake. He is actually representing the interests of his company rather than selling platitudes with the expectation of bailing with a golden parachute when the bill comes due.

Tesla Giga Berlin's New Hurdle: It's Not Only the Gov't, but Now Tesla Itself
Teslas Are Sold Out Until 2023, But The Timing May Reverse
END_OF_DOCUMENT_TOKEN_TO_BE_REPLACED