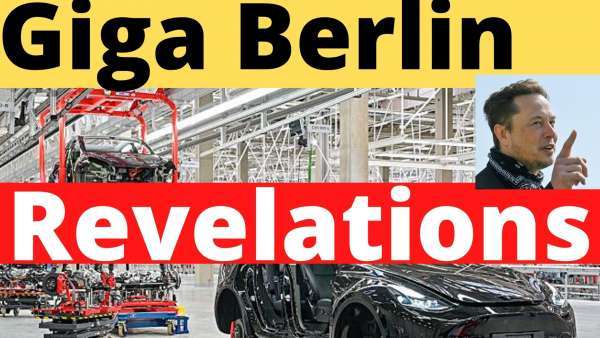 I have a very interesting update about the latest developments of Tesla Giga Berlin. For example, that when it comes to the expansion of Tesla Giga Berlin, German authories have told Elon Musk that ne needs to look further because of the water issue, that that Brandenburg can’t rely on tourism alone and needs companies like Tesla to build huge factories like Giga Berlin to build electric cars, or interesting details about Elon Musk’s personality, such as hi personally signing even small invoices of Giga Berlin. In this report I am going to tell you a lot of particulars, revealed by Brandenburg’s Economy Minister Jorg Steinbach to RBB 24.

Jobs, the economic boom, new roads and rails - the Tesla factory could change a lot in the region - and exacerbate the water shortage. Economics Minister Steinbach defends the settlement and is impressed by Elon Musk.

Rbb: Mr. Steinbach, the Leibniz Institute for Freshwater Ecology has published an assessment. It says: No large-scale industry should be located in the region around Tesla because water is scarce there due to droughts and climate change. Why does this happen anyway?

Jörg Steinbach (SPD): First, you have to put Tesla's water consumption in relation to what already existing companies there use. When it comes to the larger companies, Tesla is on the lower edge with its needs.

In addition, a distinction has to be made between expansion stage one and expansion stages two and three of the plant. [...] For the first expansion stage with up to 10,000 employees, this also works including the battery factory. But we never said that the resources directly available in Grünheide would be sufficient for 40,000 employees in the further expansion stages. We informed Tesla of this before we decided on the location. The solution is: I have to look further away.

Rbb: So you can tell the citizens with one hundred percent certainty that - as of now - there will be no problem with drinking water?

I come from security technology: There is nowhere 100% security. But according to all that can be estimated today, there will be no such problem on the water supply side.

RBB: The construction and the approval process are very quick. Should you have planned more time to take more people with you?

I am often enough in the region and present myself to the citizens in the discussion. But I also tell these people - and I mean it bitterly seriously: A federal state of Brandenburg will not be able to live from tourism alone. The tax revenue that you have without economic and industrial income will never be enough to guarantee the standard of living with everything that the state pays for. [...] I am trying to get more settlements all over the country so that we can manage climate investments over the next few years, among other things.

The second point is that Germany as a whole is not particularly sensitive to change. Everything that means change first triggers fears. This is a pity. I never found out why this mentality developed this way in Germany. At some point, however, the realization must come that this change brings something positive with it, namely that families can stay together, that young people do not have to leave because they have a perspective on life and work here.

Rbb: Elon Musk laughed at worries about water when he visited in August. How do you rate this reaction?

I would like to relate this to a very personal expression of my opinion as a person and not as a minister: I would have wished for a lot more empathy, for something more serious. That would have been much more appropriate for the mood in the region. Something was given away by this reaction.

RBB: Who are we dealing with at Elon Musk?

We are dealing with, yes, an entrepreneur. He's not only making extraordinary developments in electromobility. He also has tunneling and other technology firms. He is actually a person with a high level of creativity and is deeply into the details of the individual projects. Even comparatively small invoices have to be signed by him. You can tell that he was trained as a physicist. I had been talking shop with him deeply in physics about battery development for a long time, which was a lot of fun. In other words, a personality with extremely many facets, but one that surprises you again and again.

Rbb. The Fangschleuse station is to be relocated closer to the Tesla plant, at the cost of the country. Why isn't Tesla paying for that?

That goes back a few years. Tesla wasn't even mentioned at that time. Some time ago new trains were purchased on the line and they are much longer than the trains before. At this point it was already decided that the stations along this route would be converted for this length of trains.

Rbb. But remodeling is different from relocating?

Yes, on the one hand that is certainly correct. But that also has to do with the planning there and you had to look at the point in which direction it would be extended. At this point it makes sense and makes sense to adapt it to the given structures. It would be nonsense if you didn't do that. But as I said, the bottom line is that the train stations there have to undergo a change. This decision is much older.

Rbb. An expert opinion commissioned by the Brandenburg Left Party, however, says that this is a subsidy for Tesla that violates EU competition law.

This has nothing to do with Tesla, or at most very, very indirectly. At that point there is absolutely no interaction with this process.

The interview - reproduced here in its abbreviated version - was conducted by Gesine Enwaldt for the film "Dispute about Tesla. What does the Gigafactory bring?".

Tesla Giga Berlin's New Hurdle: It's Not Only the Gov't, but Now Tesla Itself
Teslas Are Sold Out Until 2023, But The Timing May Reverse
END_OF_DOCUMENT_TOKEN_TO_BE_REPLACED