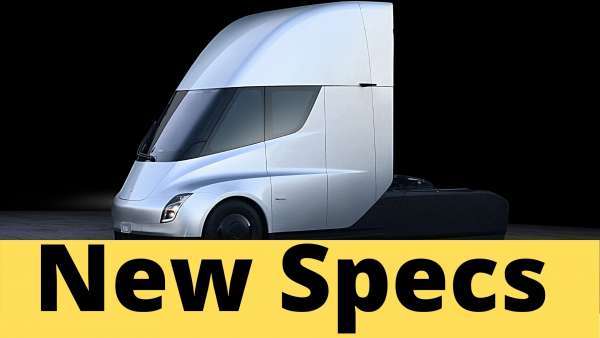 According to Teslamag, Tesla confirmed new semi-test vehicles and megawatt stores in a letter to customers.

Since the beginning of this year, more has been heard and seen again from the electric semi-trailer truck, which Tesla presented in 2017 and actually wanted to deliver from 2019. At the end of January, Jerome Guillen, then president for all Tesla electric cars and now head of the truck- only division , announced that there would be more semis on the roads in the near future. They actually came soon afterwards, albeit mostly in the form of transport goods on other trucks. And in a letter to those who ordered the Semi, Tesla has now confirmed the construction of test vehicles with technical improvements and charging with outputs in the megawatt range.

The email with the semi-information was sent on Tuesday night and reached a customer from Germany, who forwarded it to teslamag.de. Tesla does not mention a fixed date for deliveries. CEO Elon Musk said in January that production could basically start, but that there was a lack of batteries for the electric trucks.

According to rumors, reported by Teslamag, pilot production is due to start this June, initially in a building near the Tesla and Panasonic battery gigafactory in the US state of Nevada , as it was last said.

The letter to the customer now says that Tesla built several new test semis at the end of 2020. Its discoverers had already noticed this year that they differ slightly from the previous ones, but according to Tesla they have been revised even more under the sheet metal: "The most important changes were technical updates to the vehicle architecture and drive," Team. The aim was to increase range, efficiency and reliability.

With regard to the range of the Semi, Tesla explains that they are still confident that it will exceed the values ​​of 300 miles and 500 miles mentioned at the launch. The final estimates are to be published when production approaches, it says in the email without any further limitation. The higher value corresponds to a good 800 kilometers and is "easy" to achieve according to statements by CEO Musk from November 2020; With improved battery cells, even 1000 kilometers of semi-range should be possible.

In addition, the e-mail to the customer contains a confirmation that the semi should also be able to be charged extremely quickly. There was already talk of new mega-chargers in this context and Tesla got involved in the CharIN association based in Germany, which is developing a standard for super-fast truck charging. According to information in the email, various proposals for this were tested together with the US National Renewable Energy Laboratory last fall . The Tesla charging plug known as the MCS Connector (MCS stands for Megawatt Charging Solution) is currently the only one that is “able to offer a fast charging solution”.

However, the update does not give hope of an early delivery of the first Tesla Semi to customers. The team writes that the new test vehicles will be tested extensively in the “coming months”. In addition, data and feedback will be collected during this time in order to rapidly develop the design and improve manufacturing processes. The new Gigafactory near Austin in the state of Texas will be confirmed as the “final” location for production when its construction is finished.