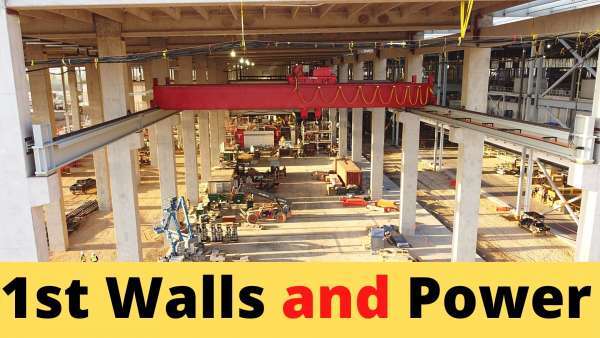 Joe says today the wind is gone at Tesla's Gigafactory at Austin and ads that Tesla is covering the first walls on paint shop.

Earlier in March, the news was that the Giga Texas’s paint shop facility is set to begin construction soon as paint application machinery has arrived on site. Then, a new shipment of containers was spotted at the facility. seven large boxes that appear to be housing several elements of what will be the Giga Texas paint shop.

"Three of the containers say “TC Mod, while three others say “E-Coat.” The final container says “Top Coat,” meaning all seven containers are likely headed to the paint shop as their descriptions align with machinery that would be found within an automotive paint application facility. E-Coat, or electrocoating, also known as electropainting in some regions, is a process used in automotive paint shops everywhere. For several years, Tesla has used this process as evidence points to a 2012 blog post from the electric car manufacturer," explains Teslarati.

There is also an interesting news from Tesla's another Gigafactory: the Giga Berlin. Today Tesla and BANG mounted a very unique crane at Giga Berlin, which immediately started operating and installing the Giga Press.

Armen Hareyan is the founder and the Editor in Chief of Torque News. He founded TorqueNews.com in 2010, which since then has been publishing expert news and analysis about the automotive industry. He can be reached at Torque News Twitter, Facebok, Linkedin and Youtube