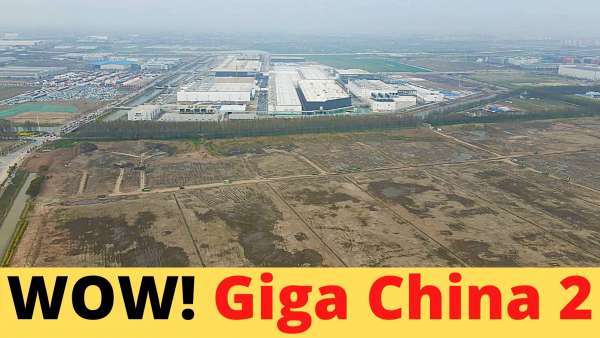 Giga Shaghai 2's Construction Is So Big, It Can Be a 2nd Gigafacatory

The factory 2 that Tesla is building next to Giga Shanghai is so big and massive it can be called Tesla's 2nd Gigafactory in China.

Giga Shanghai is still not done expanding, with construction now being underway on a massive site south of the main factory. It’s so big that can even be counted as a second smaller Gigafactory in Shanghai. Tesla is in an expansion mode as Tesla Gigafactory Shanghai’s new major expansion is starting.

A friend of Torque News, WU WA who regularly posts video updates from Tesla Giga Shanghai, in posted a new video material, showing the start of the construction and calling it a Factory 2. It's a massive land, but a little smaller than Tesla's current Gigafactory, however, it's big enough to be called another Gigafactory.

"The land in itself is quite large, covering an area of 460,000 square meters (113.6 acres). It’s smaller than the existing site for Gigafactory Shanghai, but it would likely be enough to establish a dedicated facility to produce a high-volume vehicle, such as the highly-anticipated $25,000 car that is expected to be announced in the near future," writes Simon Alvarez at Teslarati.

WU WA writes that, "Expansion of the factory has long been rumored, and indeed in the southeast of the current Factory 1 site has been given new land to the east, but this land does not meet the manufacturing space for the new model, and just as everyone was suspecting, it was revealed in March that Tesla was bidding for land near the factory as industrial land, and the size of this land was exactly in line with the division of the land that was bid. Just last night (March 29), news broke online that the land south of the factory was out of bidding, which means that Tesla and the government did not reach a lease agreement, which may be the result of a lack of unity in the land auction price. We know that there was only one bidder for the land, so once a consensus was reached on the price, it was only a matter of time before Tesla took the land, but besides, construction had already begun on the land."

This is a huge news. Tesla Shanghai may become as big as Giga Berlin. One of the most interesting aspects of this new is the size of the development land that Tesla is using for its second factory next to Giga Shanghai.

Do you guys have any thoughts on how long it would take to build the new factory? Consider Tesla's experience and the history of building several quick large Gigafactories, I am thinking it will be completed by December of 202. Obviously Model 2 is probably already designed as they wouldn’t build a factory until they gave the design. Tesla's $25,000 car is going to be very interesting when its unveiled.

Today Tesla also released released today its Q1 2021 delivery and production results, and as expected, the automaker has achieved record deliveries for a first quarter, but it also went way beyond that.