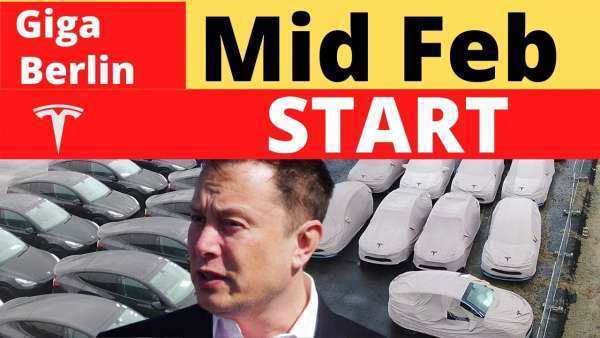 Everything Points to Mid-February Start of Giga Berlin

Two, seemingly unrelated events, may give us good hint that Tesla Giga Berlin's start of production is very likely to happen in mid February 2022.

The first event is related to Elon Musk's tweet. In a recent tweet, Musk contradicted rumors that he would be coming to Germany this week. Instead, he wants to travel to Berlin in mid-February.

When asked, Tesla did not comment on the reasons for the visit. It is likely that Musk will want to be there when the Tesla plant in Grünheide starts production.

The second event may be related to the date of the lawsuit related to Giga Berlin's water supply.

The administrative court in Frankfurt (Oder) has set the date for the hearing on the increased water supply at the Eggersdorf waterworks. As the court announced on Monday, the oral hearing is to take place on February 11 at 9:30 a.m. Then the environmental associations Nabu and Green League and the State Office for the Environment face each other.

The judgment could affect the water supply of the planned Tesla factory in Grünheide.

Note that both of these events are happening around mid February.

After two years of Tesla Giga Berlin's construction, the car factory east of Berlin is now complete. Official approval for the plant is expected in a few weeks. The first Teslas could then roll off the assembly line in mid-February in Elon Musk's presence.

Musk had repeatedly flown to Berlin or Brandenburg in his private jet over the past two years, for example to meet politicians and to get an idea of ​​the construction progress in Grünheide. Most recently, he was there in October 2021 for an open day.