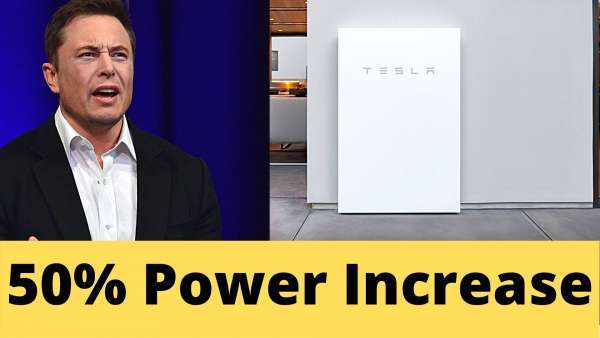 Tesla CEO Elon Musk says Elon Musk tweeted that Tesla has increased the power capacity of the latest Powerwall 2 units by up to 50% in some temperatures.

Not much has changed since the Powerwall's introduction in 2016. The main thing that was changed during the past time was the price of the Powerwall, which was increased several times.

Now Elon Musk is announcing the first significant update to Powerwall 2’s capacity. He made several tweets about the Powerwall, one of them was about Powerwall 2 now having a higher power capacity.

Musk wrote, “Powerwall 2 peak and steady power capability is better than advertised. Now that we have lots of operational data, Tesla can unlock higher capabilities for free via software update next month. Depending on production date, power increase power may be more than 50% at 30C ambient temp.”

"First off, Musk seems to say that Tesla has determined through data that older Powerwall 2 can push a higher power output than the currently advertised 7kW peak and 5kW continuous. That’s going to be unlocked through a software update pushed to Powerwalls next month.

"Secondly, Tesla also made hardware changes to improve the power capacity in more recent Powerwall 2 battery units since the CEO mentioned that the extent of the power increase is dependent 'on the production date.'"

Years ago Elon Musk announced a supposed revolution for home producers by unveiling Tesla's Powerwall batteries, designed to store surplus energy and use it on cloudy days or at night. But Martinez is far from optimistic about the impact this invention has had so far. "Technological development and the decrease in prices have not reached batteries, which penalizes the facilities with a very high extra cost. They are not competitive at the price level and it takes longer to amortize them," he said.

What has happened: The businessman explained the operation of the solar platform on Twitter.

He said "The Powerwall will be powered exclusively by solar energy. Powerwall will only interact between the meter and the home's main electrical panel, allowing for super easy installation and providing a perfect backup for the entire home in the event of power outages."

In a thread of tweets, Musk assured that the capacity of maximum and constant power of the Powerwall 2 "is better than what is advertised."

"Now that we have a lot of operational data, Tesla can unlock superior capabilities for free through next month's software update," Musk wrote.
Armen Hareyan is the founder and the Editor in Chief of Torque News. He founded TorqueNews.com in 2010, which since then has been publishing expert news and analysis about the automotive industry. He can be reached at Torque News Twitter, Facebok, Linkedin and Youtube.