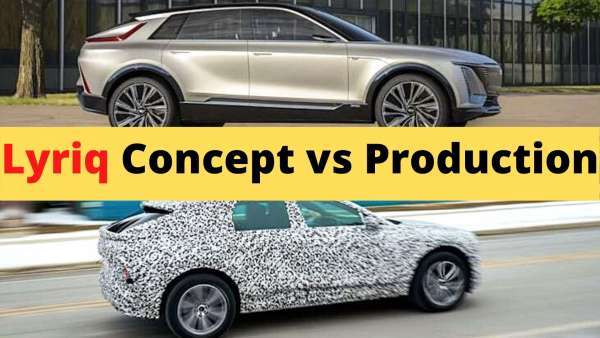 Cadillac Lyriq, an EV Crossover With a Giant Display, Warms Up With Pre-Production Show

The electric Cadillac Lyriq is expected to travel up to 300 miles from 2022 and have 100-kilowatt-hour battery pack.

Cadillac Lyriq pre-production prototype is shown Testing for the first time. Let’s check out what’s changed between the concept and pre-production car.

Cadillac Vice President of North America Sales, Service, and Marketing Mahmoud Samara celebrated on LinkedIn about the milestone of pre-production testing of the Cadillac Lyriq now being underway at General Motors' test center in Michigan. The brand's premium, electric crossover goes into production in roughly a year during the first quarter of 2022.

He wrote, "The shift toward electrification is accelerating here in the U.S. and in markets around the globe and at Cadillac we are proud to be part of this transformation.

"Back in November 2020, Mary Barra announced that LYRIQ, Cadillac’s first all-electric vehicle, would go into production in the first quarter of 2022, just about 12-months from today.

"Now with prototypes on the ground, our incredible engineering team is hard at work fine tuning LYRIQ to ultimately deliver a truly extraordinary SUV. One that plants the cornerstone for Cadillac’s all-electric future.

"LYRIQ is setting the standard for the future of Cadillac and I can’t wait to share even more exciting news soon."

The Lyriq EV, still officially a show car, is based on the GM Group's new BEV3 platform and rolls off the assembly line at the GM plant in Hamtramck near Detroit, which has been converted for electric car production. GM also produces the autonomous Origin Cruise model and the electric GMC Hummer EV there . The first Erlkönig pictures, which the company has published on LinkedIn itself, now show that the way to the start of production is not too far off. Mahmoud S., Cadillac's deputy sales manager for North America, announced in the same posting that production should start in the first quarter of 2022.

The new platform allows battery modules with a capacity of 50 to 200 kWh to be installed. Thanks to the "Ultium" batteries, the company can build the battery packs flexibly depending on the body shape. Vehicles with high ground clearance are arranged vertically in the vehicle floor, while the batteries are arranged horizontally in lower models. The maximum range of the BEV3 vehicles is over 400 miles (the equivalent of 644 kilometers), and the 400-volt batteries are charged using 200 kW rapid charging.

A 180 kW electric motor on the front axle drives the Cadillac Lyriq, while a 250 kW electric motor is installed at the rear - making 330 kW or 450 hp. However, the front engine is only available if you choose the all-wheel drive option. Charging takes place via a CSS fast-charging port (based on the American Combo 1 design), which is located on the left-hand side of the vehicle directly behind the wheel arch.

In order to be able to charge, a comparatively huge cover opens and gives access to the CSS connection. And so that nothing really goes wrong, the thing is illuminated with an LED light strip. For the Lyriq, Cadillac specifies a charging power of 19 to a maximum of 150 kW, which differs from the platform information. The battery capacity in the Lyriq is estimated at 100 kWh.

Tesla Giga Berlin's New Hurdle: It's Not Only the Gov't, but Now Tesla Itself
Teslas Are Sold Out Until 2023, But The Timing May Reverse
END_OF_DOCUMENT_TOKEN_TO_BE_REPLACED