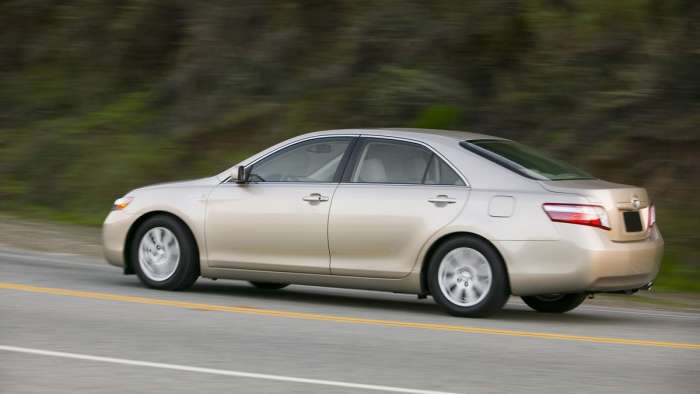 If you have a first-generation Toyota Camry Hybrid, you will want to know what I have learned about the batteries.
Advertisement

Toyota Camry is one of the best-selling mid-size sedans. The hybrid version made it even more popular when fuel prices shot through the roof over a decade ago.

These cars have been out a few years now; we see where the weak points are and why. I recently bought a 2007 Camry and found out the hard way about the way these cars are eating through the traction battery. Here is what I know so far.

Toyota Camry Hybrid: Like A Prius, But Bigger
Toyota Camry is built on reliable hybrid technology. It functions similarly to Prius, seamlessly transitioning back and forth between gas and EV.

Camry Hybrid filled a niche in the hybrid market for people who wanted something larger but needed that additional fuel economy. It filled the gaps that Prius could not and become a staple part of the Toyota hybrid lineup.

What Went Wrong With The Batteries?
Toyota Camry Hybrid has a much larger engine and battery. The 34 module pack has 245V (nominal) and a 2.4L gasoline engine.

The combination is a win until Camry owners started seeing early failure in the hybrid battery pack. One hundred thousand miles or less started to become commonplace.

After buying my 2007 Camry hybrid, I called a friend who sells certified used battery modules. I told him what I needed but asked him why it seems Camry modules are required more often than Prius.

He told me that when he gets battery packs in, the ones that come from Camry are usually more deteriorated than those of a Prius. I thought this was rather interesting and asked if his results were consistent. He assured me they were after doing this for nearly a decade.

My theory is with the combination of more modules and only a fan to cool them down, the heat saturates the modules and wipes them out faster. Whatever you want to tell yourself, just know that it consistent and happens.

Conclusion
If you are in the market for a used Toyota Camry Hybrid, I would take a serious look at the hybrid battery beforehand. If the car has around 100k on it, check the condition with Dr. Prius first. You may be able to negotiate a better deal.

Overall these cars are pretty stable and reliable. I think once the new lithium battery conversions come out for them, we will have a real winner on our hands.

That is all for today. If you would like to discuss this topic further, find me on Facebook or Twitter. Happy to help, and remember Today's Adventure is Tomorrow's Story.

Having trouble with codes? Take a look here to see if this resolves your issue.