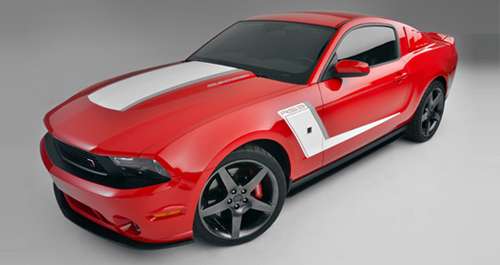 When "more" is not enough, then "even more" will have to do, and the 2012 Roush Stage 3 Mustang has just that. Roush Performance announced that the 2012 Stage 3 Mustang, equipped with the R2300 RoushCharger supercharger will produce 540 hp and 465 lb-ft of torque.
Advertisement

The Roush exhaust system uses a "unique hollow-chamber muffler design" that Roush says won't change over time like conventional fiberglass-packed exhaust would. Roush coyly calls it "off-road." Street legality is up to how and where it's driven, and Roush isn't going to take responsibility anyone's good or bad behavior.

The 2012 Roush Stage 3 Mustang introduces a new color option package that allow up to 288 different color combinations from eight choices of base vehicle color, six graphic colors and six graphic accent colors, presumably limited by one's good taste. The Roush graphics for the 2012 Roush Stage 3 Mustang will have metallic flaking in the automotive paint grade striping that Roush promises will give a deep tone that looks more like custom paint than applied graphics.

Additional color options for the Roush RS3 are available with the brakes and wheels. The brake calipers for the 4-piston 14-inch rotor system include Roush Red and black, and wheels with the 20-inch Hyper-Black or 20-inch chrome wheel selection. A color configurator at roushperformance.com can be used to test color combinations. Note that Kona Blue will not be available after May due to the earthquake in Japan.

A statement released by Roush Performance says that the 2012 Roush Stage 3 Mustang "is expected to start appearing" on Roush authorized Ford dealer lots by the end of April 201. Roush spokesman Tim Wheeler, however told Toque News that Roush Performance is operating with a full order book through May.

Toyota's First EV Will Have a Name of BZ: Toyota BZ
First Videos From Inside The Boring Company's Las Vegas Loop
END_OF_DOCUMENT_TOKEN_TO_BE_REPLACED