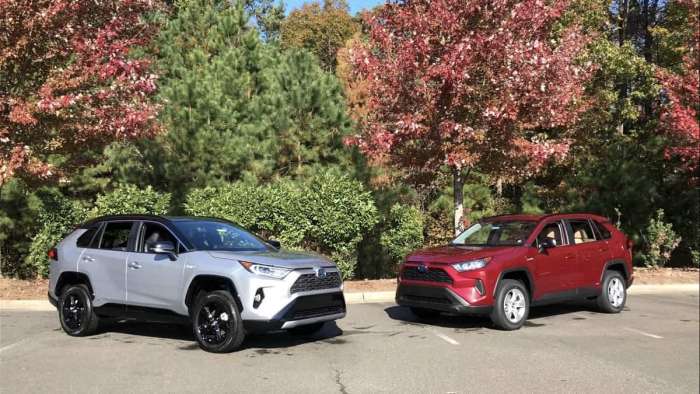 Find out how the newly-debuted 2021 RAV4 Prime will stack up against the most popular current RAV4 Hybrid models.
Advertisement

How do you find ways to top your previous successes – especially when you are already the best-selling SUV in the entire country? The Toyota RAV4 is best-in-class and has been setting records since it was redesigned for the 2019 model year. With a rugged sporty exterior and modern interior styling, along with many new safety and technology features, the RAV4 is incredibly appealing to buyers.

Much of this success can be directly attributed to the RAV4 Hybrid. The Hybrid gets 40mpg combined, has very good power and is a strong value for the cost.

Things just got a little spicier too. Toyota just debuted its newest offering – the 2021 RAV4 Prime plug-in hybrid. It has received plenty of attention to say the least. Since it will be coming to dealerships in the summer of 2020, which is right around the corner, let’s see how RAV4 Prime compares with the current 2020 RAV4 Hybrid.

Potential buyers should be intrigued by many benefits of driving a new 2021 Toyota RAV4 Prime. To me it is interesting because it will appeal to both daily work commuters and families who go love going on outings and road trips.

The main philosophical difference with the 2021 RAV4 Prime and the 2020 RAV4 Hybrid is that one is a conventional hybrid that uses both gasoline and electric power. RAV4 Prime will be a plug-in hybrid, meaning you can plug it in at home or work and it will build up electric power. You can drive for up to 39 miles on one full charge without using any gasoline. This is what makes it attractive for commuters. 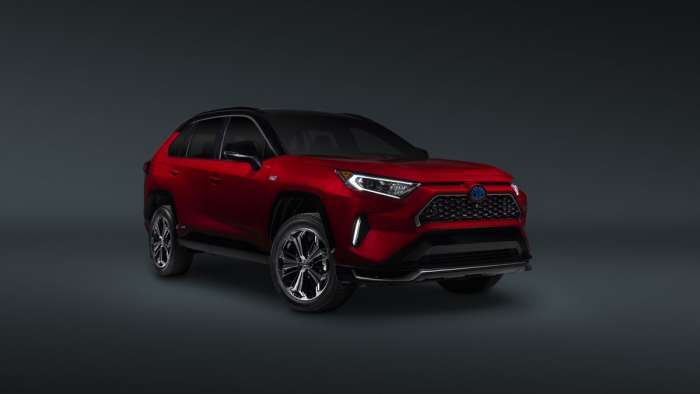 One of the main reasons for choosing a 2019 or 2020 RAV4 Hybrid is fuel economy. Drivers can take full advantage of 40mpg combined (41 in the city and 38 on the highway).

The 2021 RAV4 Prime is measured in a slightly different way, using a measurement called MPGe. This is the miles per gallon “equivalent” and it factors in both gasoline and alternative fuel sources. In this case it is electric. RAV4 Prime gets an amazing 90 MPGe. The 2020 Prius Prime, in comparison, gets 133 MPGe.

A month ago Toyota promised the 2021 RAV4 Prime would be the most powerful RAV4 yet. They delivered on that promise. This newest RAV4 model will produce a total of 302 net horsepower.

Previously the fastest RAV4 was the old V6 engine, which reached 0-60 in 6.3 seconds. In fact, at the time back in 2012 it was the quickest Toyota in the entire lineup.

RAV4 Prime will make its debut next summer as the second fastest Toyota, behind only the 2020 Supra. Supra is “Toyota-rated” with a 4.1 seconds 0-60 time, although most would agree that is a conservative figure. Prime will make the 0-60 test in just 5.8 seconds. The 2020 RAV4 Hybrid accelerates from 0-60 in 7.8 seconds.

Time for your thoughts on all things Toyota RAV4

The beauty of this comparison is that both models will be available for the public to choose. It is not like one will be replacing an outgoing vehicle. This new RAV4 Prime should only help Toyota build on the tremendous popularity of the entire RAV4 lineup.

What RAV4 model do you think is the one you would pick if you had the choice? Would you pick a gasoline-only RAV4, a RAV4 Hybrid or a RAV4 Prime?

See key highlights for 2021 RAV4 Prime in my video review.

DeanMcManis wrote on November 25, 2019 - 7:35pm Permalink
On paper, the RAV4 Prime looks like a clear winner over the RAV4 Hybrid. Especially if Toyota keeps the price difference between the two models close. Just the Federal incentives alone could potentially bring the final price of the RAV4 Prime under the RAV4 hybrid. One big point here in CA is qualifying for the HOV commuter lane. The Mitsubishi Outlander PHEV and Prius Prime qualify, but it is not certain if the RAV4 Prime's gas engine is clean enough to qualify. None of the regular hybrids (non-plug-in models) qualify. And if the RAV4 Prime doesn't then most commuters would pick a full BEV like the Bolt, Model Y or the upcoming Mach-E instead. Outside of Mitsubishi's little known PHEV Outlander, and a few expensive European EV CUVs, there is little out there today to compete against the RAV4 Prime, so it should thrive in it's specific market. But the competition is going to get stiff quickly in about 6 months from now in the EV CUV market from both PHEVs and BEVs.
Patrick knowles wrote on December 26, 2019 - 4:22pm Permalink
How far can I drive on the highway without stoping yo fill up the gas tank, average speed 74 mph on a fully charged battery?
Tina wrote on November 26, 2019 - 1:39pm Permalink
Interested in knowing if the Prime dimensions will be the same as the RAV4 Hybrid. From the picture it looks bigger but not sure if it's slightly closer to the camera making it look that way.
Al D wrote on November 26, 2019 - 2:56pm Permalink
The federal tax credit should knock the cost of the RAV4 Prime to under $30,000. That's a bargain. This may be the one vehicle capable of making me part with my 2015 Camry SE, which has been very reliable.
Wayne Beamer wrote on November 26, 2019 - 4:08pm Permalink
Hey Jeff: We love our Rav4 Hybrid. I’m wondering if it’s a reasonable idea to trade up to a RAV4 Prine in 2021. What would make that advantageous for us? Love your work! Wayne
DeanMcManis wrote on November 27, 2019 - 5:58pm Permalink
The good news is that Toyota's have relatively good resale value, so you could move up when the new Prime model comes out without taking too much of a hit on cost. But the RAV4 Hybrid already has 95% of the capabilities of the upcoming RAV4 Prime, so there might not be enough reasons to do it.
Wayne Beamer wrote on November 28, 2019 - 10:05pm Permalink
Hey Dean: Good point. I work from home and my wife is retired, so those points are valid. BTW, the lowest MPG we've gotten on our hybrid so far is in the 37 mpg range when it was really cold. Thanks! Wayne
Squints wrote on November 27, 2019 - 6:01pm Permalink
Wayne, hopefully Jeff will jump in here too, but I would think that if you commute daily by car and have a place to plug in at home and/or at work (especially if there's free charging) then it would make a lot sense to upgrade to the prime, since you'd be able to get away with only using gasoline for longer trips out of town and could basically operate electric-only the rest of the time. However, if you commute by transit (or don't commute at all) and only use your car for longer trips, it might not be worth the extra cost to upgrade to the prime unless you're itching for that extra power, since the fuel savings would be much more modest.
Wayne Beamer wrote on November 28, 2019 - 10:07pm Permalink
Hi Squints! My wife is taking some retirement time before doing some consultant work, and I work from home. What you and Dean said makes sense for us about sticking with what we've got. So far, so good. Thanks! Wayne
Jim Smith wrote on November 28, 2019 - 2:53am Permalink
Wonder if the RAV4 prime will have a reasonable tow rating or will it be rated to tow at all?
CKL wrote on December 2, 2019 - 11:25pm Permalink
Hi, the HyRav is rated to tow 1.5 tonnes in Australia. So it's capable of towing, but maybe different vehicle rules in the states prevents it from tow rated?!