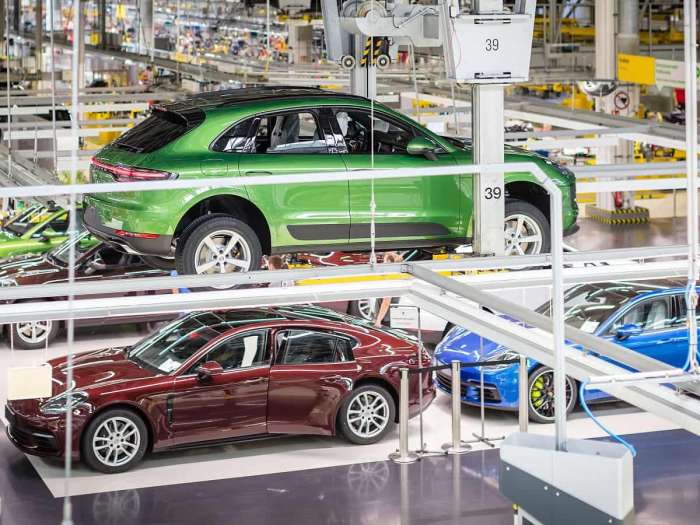 Production of the New Porsche Macan Begins After Facelift

After word premiere of Porsche Macan facelift in Shanghai, China, just a month ago, Porsche starts production of the updated model. Current generation compact SUV Porsche Macan was launched back in 2014 and Porsche sold more than 350’000 Macans since then, so let’s see what Porsche has done to inject new life to its volume-seller.
Advertisement

Torque News has covered it before, SUV segment is the one dominating sales globally and tendency continues to grow. First two best selling models at Porsche are also SUVs: Porsche delivered 46,600 Macans worldwide during first half of 2018, followed by Cayenne with 28,700 deliveries. As Porsche Macan sits in the full of worldwide demand segment and sells well for Porsche, no wonder its mid-life model revisions are subtle, despite Porsche marketing the model as “new”.

Porsche's choice of new colors among other options

Porsche is famous for long option lists and latest revisions are intended to make Macan more customisable than ever before. Most recognizable of which is addition of four new exterior colors “Miami Blue”, “Mamba Green Metallic” and “Dolomite Silver Metallic” and “Crayon”, which can be combined with new interior packages and choice of new 20- and 21-inch wheel designs.

Porsche emphasizes making Macan look even more sportier was among it’s model revision goals. In the interior this translates to new option of GT sports steering wheel. If the car is optioned with the Sports Chrono Package, one would find the mode switch integrated to the GT sports steering wheel, plus Sport Response Button. We may remember this functional design element debuted in the facelifted version of Porsche 911 sports car back in 2016, which only further enhances Macan sporty associations.

List of comfort oriented options is also extended and now include a heated windscreen and an ioniser to improve the air quality in the interior.

Networking is a standard feature now

From now on each Porsche Macan is equipped with a Connect Plus module, making every vehicle fully networked as standard. New module integrates, according to Porsche press release, “various digital functions and services”, key of which is the “Here Cloud” for real-time traffic data and intelligent voice control.

New to the assistance systems is Traffic Jam Assist which enables more comfortable usage of adaptive cruise control at city speeds not only by assisting to acceleration and braking, but also assists with steering in a traffic jam or in slow-moving traffic.

Porsche follows the simple motto “If it ain't broke, don't fix it” with the mid-life facelift to its compact SUV. Subtle but still new exterior design upgrades will make Macan speak the common modern Porsche design language and give emotional comfort to existing owners who would consider upgrading from pre-facelift Macan model. And to those potential new customers, Porsche has got Macan ready at its best.

LG's New EV Battery Plant Is a Welcome News for Tesla
Tesla Giga Berlin's New Hurdle: It's Not Only the Gov't, but Now Tesla Itself
END_OF_DOCUMENT_TOKEN_TO_BE_REPLACED