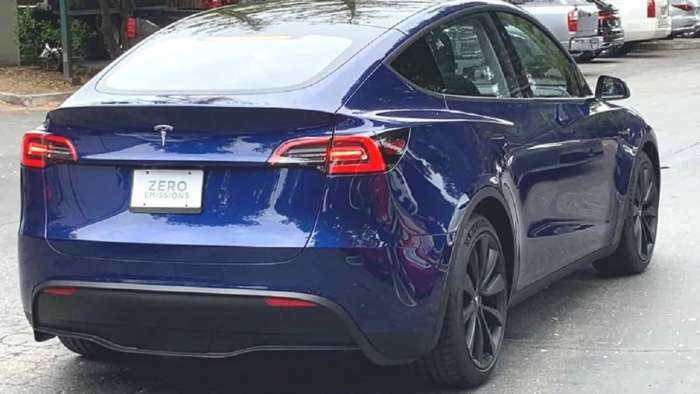 This is possibly more than a spy shot of Tesla Model Y. What do you think?
Advertisement

I have been driving around the Tesla Design Studio in Hawthorne lately to wonder if this is truly the first Model Y sighting ever seen. Between the 405 in Culver City to La Cienega Blvd by the airport I wonder if this is so.

What pleases me even more about this Model Y sighting in the wild is that it’s using a ChargePoint public station. I’ve been trying to show folks that a car doesn’t need its own network for you to find a public charger, even for a Tesla owner. And a Tesla pulling into a Chargepint station is definitely sending a message to all electric car owners, present and future.

I do know this: for the last several years since probably around 2017, ChargePoint has been making a point in advertising to woo Tesla owners, whether their chargers are compatible or not. Electrify America, is just about finished building out that entire charger network of state of the art superchargers, that most present electric vehicles aren’t 100% compatible with. The networks are building ahead of the technology curve so that the vehicles and infrastructure can catch up.

When you do get your first electric car make sure you buy adapters for different networks as the networks continue to unify their compatibility, especially if you’re going to do a lot of long distance driving. Mind you, some of those adapters are expensive, but do you want to be caught driving on electric fumes in the middle of nowhere you don’t know, with a charger you could have used had you had the right adapter?

Y don't you tell us what you think about this Tesla? #TeslaSpotting #ModelY pic.twitter.com/29uko8nz7J

While we are talking about Tesla Model Y, the Model U is in the news as well. It may decide if Tesla is going to be an off-roading carmaker too. See my morning story titled Tesla Can Become an Ultimate Adventure Vehicle, but Off-roading Depends on Model U.

Also read The Tesla Model Y Unveil: This is Electric Car Life After Leaf and Bolt.

Dennis wrote on May 11, 2019 - 11:19pm Permalink
If the Model Y is like the Model 3 (and it is mostly) it will only come with a J1772 adapter. No CHAdeMO, no CCS (unless you buy the European model).
Jeremiah wrote on May 11, 2019 - 11:21pm Permalink
are your referring to their superchargers that are direct current charging at rates that exceed all other EV limits? It wasn't like the other manufacturers helped Telsa build its network or anything. In fact, the other manufacturers tried to stop and slow down Telsa as much as they could in every way possible.
Al Castro wrote on May 25, 2019 - 8:23pm Permalink
Well Jeremiah I hear you, but the charging industry is morphing into something like cable TV was back in the late 70’s. And ChargePoint has been spending a lot of advertising on luring Tesla customers if you’ve seen their banners all over the Internet. And I find it beyond coincidence that this photo comes from ChargePoint’s Twitter account. Somethings up! ;)