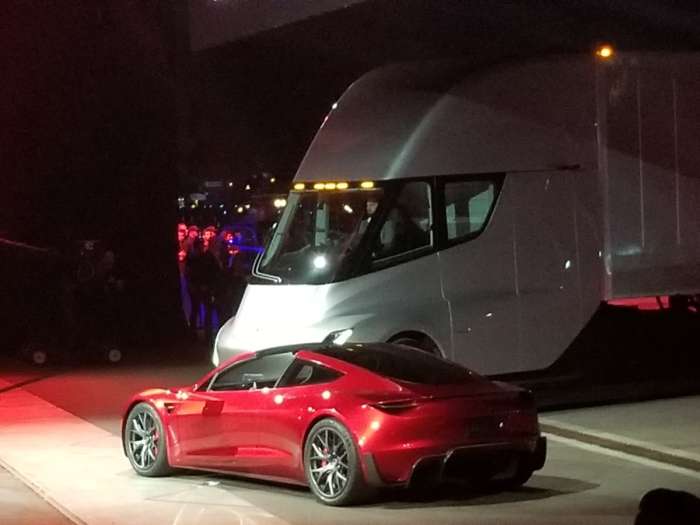 Here’s 2 for the Road in 2019: Tesla to Put Roadster 2 and Mighty Semi into Production

In an unusual nighttime announcement during the week after the American markets closed, Tesla said it was setting 2019 production dates for two all new vehicles, one coming as a surprise. With the launch of the second generation Roadster and the surprise production of Tesla Semi, Tesla sets its sights on both extreme ends of the vehicle market, while it battles itself to bring the Model 3 to the global market, and battles insolvency before it beats them everywhere.
Advertisement

Tesla Semi and Roadster 2 head for production next year.

Tesla Semi and Roadster 2 are going down the assembly line in 2019, according to a press release by Tesla. The Roadster was expected, but given Tesla’s CEO Elon Musk’s recent statements about not having factory room for tractor production and frankly without saying Tesla had little cash to produce the tractor, something has since changed, and the Mighty Tesla Semi is now on its way to the assembly line and then to the roads of electric destiny.

Issues with Range and Production Date

But in a first quarter earnings call earlier this year, Tesla CEO Elon Musk downplayed if not outright tamped down any expectation of the Semi being put into production. At the time there was a feud going on with the head of Daimler Trucks as to if it were possible for a battery pack to have a 500+ mile range.

“He [Draum] does not know much about physics. I know him. I would be happy to engage in a physics discussion with him. I actually studied physics in college. Even if we didn’t improve our battery technology at all, we could achieve a 500-mile range truck. We’re gonna do better than 500 miles.”

During that call, Tesla CTO JB Straubel also shared his thoughts. He also stated that they were about 2000 orders for the truck at the time. But Mr. Musk left the impression there was no Semi sales push nor production plans. Apparently something has changed. What that change is, is yet unclear.

It’s Really About the Tractor

"I swear it's bigger in person" #teslasemi

Both models made their dramatic debut at Tesla’s unveiling in December last year. One would think it would be all about the sports car, obviously. The anticipation made the event seem more about the tractor. The sports car’s production was imminently expected, but even the possibility of production made the tractor a little elusive and in that elusiveness, curiosity and intrigue turned to mystery and obsession. The world was already used to a Tesla Roadster, it was the idea of how a vehicle could impact more lives like an all electric tractor that consumed our attention, as opposed to a sports car very few can afford. The Tesla Semi’s life from that point took on a celebrity not quite seen before from any non-living object, let alone from a proposed vehicle program which created the most famous three known one-off non-production all electric tractors the world has ever seen: Semi Silver, Semi Blue, and Semi Black.

Back in March when Semi Silver was shouldered on the side of a highway in what we now know was due to the drivers conducting roadside tests, social media went into a frenzy thinking she had broken down. In a YouTube video you hear people cheering because of this, why would one cheer at something like that is left to the imagination. But this is where this reporter was introduced to the what Electrek.com calls, “the shorts,” in apparently reference to the losing end of Tesla stock or just plain ‘ol naysayers, doubters, and deniers who have nothing better to do but be negative about electric vehicles. Why they do that “thing” they do, is subject to speculation, but at the risk of sounding political it seems similar to the climate deniers and birthers. And no one on social media asked if the road crew needed help with Silver Semi, at least where this reporter looked, which was the sad part, thankfully none was needed.

And speaking of YouTube, there’s always been a Semi sighting captured on video, some of the footage while the tractors are on battery duty hauling between Fremont Assembly and the Gigafactory, for folks to wonder where were you when you first saw one. Some footage bobtailing some trailering. So these mighty electric tractors that could, have caught the attention of our national consciousness that their presence has taken a foothold into the conversation about our future and clean energy, as well as a foothold into our hearts. These Instagram pictures were taken with employees outside at Fremont Assembly of all places to wonder, that’s the people who built them to be so endearing to these tractors, one could only imagine elsewhere car or truck friendly like at an auto show.

This is where the reality of the situation comes back to remind you of the serious situation Tesla faces to wonder if those three tractors will ever have a future beyond a car museum.

The boutique luxury vehicle maker who’s developed a talent for making select battery electric vehicles in niche car markets for targeted demographics is trying to go global and do mass production with its Model 3 sedan and having production and financial difficulties in the process. If they’re not careful, they might not be able to make anything at all anymore and soon.

On the day of the announcement Tesla closed at $320.23 down $3.62 or -1.12%, but that was before the announcement. Tesla is $10 billion in total debt and it’s credit rating has been downgraded by Moody’s and its bonds now valued at junk. Insolvency looms in the backdrop now of every long term business decision Tesla makes, to wonder if the company will survive by each month, not quarter, to even see the light of day when either of these two vehicles, Semi and Roadster 2 are supposed to be in production next year.

The GM Bankruptcy: A Little Glimpse

Some analysts say Tesla, a fraction of the size of GM, is in a worse financial situation than GM was at the threshold of their dramatic 2009 bankruptcy, when President Obama asked for the resignation of its CEO Rick Wagoner in a late night White House visit after dropping off his revised proposal to the president for a new post bankruptcy GM, with Mr. Obama’s insistence of only 4 brands. Little did Mr. Wagoner know that President Obama’s intention was to make that revision Wagoner’s last act as GM CEO, as Wagoner had to awake board members and GM media relations workers to tell them after his meeting with Mr. Obama that he had to resign. President Obama then called the federal bankruptcy judge assigned to the docket and asked him to fast track the bankruptcy to discharge for the sake of the country.

GM was quickly placed into and out of a receivership during the process, and its old useless assets and unprofitable operations were quickly taken out and put aside. It lost its seat on the Dow Jones Industrials, and its ranking in the Fortune 500. A new, leaner, and some say “meaner” GM emerged, the global Goliath it is now on the verge of dominating the world with electric and autonomous cars. GM’s bankruptcy however, was a restructuring and more importantly, part of a bailout. .

A Tesla bankruptcy however, might possibly lead to liquidation because its debt ratio is much higher, and there is no anticipated bailout. Unless a buyer steps up to assume at least some of that debt and keep things going under new finances and leadership, closure and liquidation is likely to come.

The Death of the Tesla Semi Pickup

A few weeks ago before the July holiday, Elon had a Twitter gathering online to queue feedback to see where his vision of his pickup truck should be going. At that moment a shift of segments and strategy occurred, that unfortunately retired the Mighty Semi before she could enter service. By Elon deciding to take on the Ford F-150 in his plans, that certainly eliminated using Semi on a modified flatbed frame to compete with say, the GMC Topkick as a big pickup.

The Birth of the Tesla RV Camper

There was in a sense a mourning, because of the great expectations we put on these now iconic trucks, They were retired from tow duty before given a chance and confined once again to just trailer duty. Until this Instagram picture blew up social media, that became my coverage of Semi dressed as an RV camper. The world went crazy.

So who knows what’ll happen. Perhaps as early as later next year or early the next, an electric Winnebago coached from Class 8 Semi will be barreling down the interstate on her way to Disneyland. And if so, this reporter will be there to cover it. Stay tuned.

What do you think of Tesla’s production plans? Let us know in the comments section.