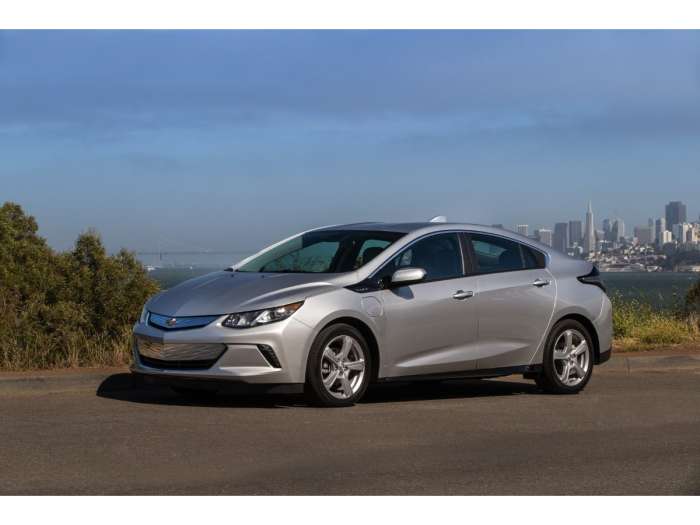 Last week Chevy announced updates for the 2019 Volt, and there are some nice improvements including faster charging, stronger regen, and various software and option package updates.
Advertisement

Here are several things that are new with the 2019 Chevy Volt.

I’ve had 3 Chevy Volts so far, and even though the slower 3.6kW onboard charger seemed to be an unnecessary limitation. I think that Chevy was concerned initially that owner’s home electrical systems would potentially not be able to keep up with faster charging capabilities. But faster charging offered on rivals like Nissan’s Leaf (optional 6.6kW), BMW i3 (7.7 kW) and Tesla (11.5-17.2) Showed them the importance of faster Level 2 charging. This will pay off for the new Volt in cutting the charging time nearly in half, down to 2 hours and 20 minutes. For the public charging stations that charge by the hour it could be a real savings. It is unfortunate that they didn’t offer the DC Fast charging option that they have on the Chevy Bolt (50kW/U.S.) But it is still a good upgrade.

The 2019 Chevrolet Volt Has a Stronger Regen

This is something good that Chevy did bring over from the Bolt. When you put the shift selector into L (low) it does initiate more aggressive deceleration, slowing down more quickly when you let off of the accelerator pedal, or press the Regen on Demand steering wheel paddles. In my log daily commute I have gotten used to doing “one pedal” driving where you simply press the accelerator to go and let off to slow down.

But I always thought that there should be a more aggressive regen braking if you let off really fast. And this two-step method (put in Low, pull the paddles) looks like a good solution. I always thought that it was funny when I saw the recent Nissan Leaf’s advertising for their “new” E-Pedal driving, when the Volt has had that capability for 8 years now.

The reality of electric powered space heaters is that they are all inefficient, and suck power up quickly. By default the Volt would automatically turn on the gas engine to assist in heating the car when the outside temps dropped below 32 degrees. Now you can maximize your electrical range by overriding the gas engine assist down to -17 degrees F (Brrrr). Personally, I would just manually turn the gas engine on (Hold Mode) for the first 20 minutes of my commute to heat up the gas engine, and take the chill out of the car on cold days. 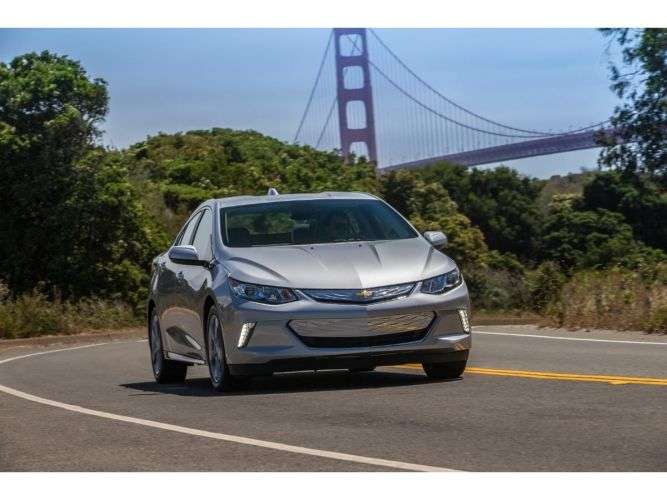 To go along with the charging, regen, and cold gas engine lockout, Chevy updated their 8.0 in. touchscreen infotainment system with a new energy app that shows how different driving factors impact range better than before.

Other New Additions To The 2019 Chevy Volt

The Premier Volt models now include a power driver seat. There are changes in the pedestrian alert system. You can switch between standard and adaptive modes for cruise control (when so equipped) and the car will bleep it’s horn when the tire pressure hits the proper level, when refilling them.

Not earth shattering changes for the 2019 Volt, but welcome ones for sure.

Klaus wrote on July 3, 2018 - 12:10am Permalink
You didn't even mention the enhanced rear view mirror of the 2019 Chevy Volt. That's one of my favorite enhancements, charger, and regen aside.
Dean McManis wrote on July 3, 2018 - 12:14am Permalink
There are a bunch of smaller additions like new interior color options, a blackout package, and inductive phone charger reposition. There is a new rear view camera, but I am not sure what the improvements are. I thought that the current one was fine. One feature in my Cadillac ELR that I like is that it also visually alerts when a car is off to the side but moving into the area when you are backing up.
Diogo wrote on July 3, 2018 - 12:17am Permalink
Cross-traffic alert? The Volt Gen2 has this, but I think you need the driver confidence package
Lowel wrote on July 3, 2018 - 8:17am Permalink
In 2 years, 26k of trouble free service on my 17 G2, I've found that being able to get a full charge overnight at 12 amp setting works fine for me. Expected to buy/install a level 2 charger but have just never found the need. I DO want that power seat though and adjustable anchor point for shoulder belt is sorely needed, an insult it's not on my car.
Dean McManis wrote on July 4, 2018 - 9:06pm Permalink
Yeah, overall the slower charging has not been a big problem for me either. I do not do much charging except for home. I did install a level 2 charger though, so it does charge in 3.5 hours compared to 7.3 hours at 110V. Usually, I just plug the Volt into the charger and set the timer to charge at 12AM because my power costs are lowest between 12AM and 7AM. And it is always ready and charged up the next morning.
Randy Rollins wrote on July 8, 2018 - 5:39pm Permalink
I wonder how we are saving with electric cars. They cost more to begin. The power plants will be worked harder. Just imagine an area the size of LA With mostly plug in electrics plugged into the grid. What will the power plants burn.we all know green electricity will not do the job. Those big fans should be put in reverse so we might have a breeze.
Texconsin wrote on July 30, 2018 - 11:21am Permalink
I save A LOT. Gas, even in Texas, is over $2.50/gal. I spend about half that, 40 miles on electricity and 20 miles on gas every day.
DeanMcManis wrote on July 30, 2018 - 1:16pm Permalink
I also drive between 65 and 100 miles a day, and I spend $20 a month in gas, and $45 a month in electricity for the Volt. It works out as quite a bargain per mile driven.