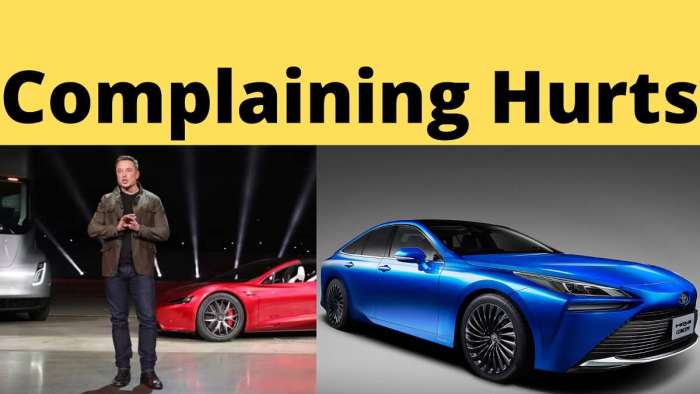 Is Elon Musk hurting the greater future of EVs when he puts down fuel cell EVs and plug-in hybrid EVs?
Advertisement

I consider myself an EV (electric vehicle) supporter. And I actively participate in daily discussions about the many advantages of electrified vehicles, and related EV technologies.

And in the process of reviewing EV materials, videos and articles, I keep reading and seeing battery-only (BEV) supporters who are actively putting down other EV technologies, like plug-in hybrids, regular hybrids, and fuel cell EVs.

Next to PHEVs (plug-in hybrid EVs), the most common attack that BEV supporters make is against hydrogen fuel cell EVs. FCEV’s biggest drawback today is simply a lack of refueling stations across the country. Right now, there are about 40 active hydrogen refueling stations in California, and essentially nowhere else in the U.S. This supports California’s roughly 6,500 FCEVs, and 30 buses on the roads today. There are current plans to expand the H2 refueling network across the country, as well as plans for hydrogen powered electrical “peaker plants” as a clean air backup for cities when wind and solar power generation drops off. Plus new businesses are supporting FCEV trains, transportation, and shipping moving forward.

Japan, Korea, and China are still backing FCEVs, with Toyota, Honda, Hyundai building FCEV models that we can buy today. Despite the controversy, Nikola (mentioned above) is eagerly pushing to build their FCEV Semi, and a FCEV pickup truck in the coming years, and building up the country’s refueling station network at the same time. I think that beyond the H2 advantages for clean, point-to-point shipping, I see great opportunities for Plug-in hybrid FCEVs, which can be easily achieved by supporting FC automakers simply adding a bigger battery and external charging capability to their FCEVs to get the best advantages of both technologies.

What about Hybrids and Plug-in EVs?

Some BEVs (battery-only electric vehicle) advocates also actively shoot down other EV technologies, like hybrids, and plug-in hybrids. And they seem to be unaware that they are actually shooting themselves in the foot by discouraging the majority of gas-only auto buyers from looking at any EVs.

Part of the motivation of these BEV-only detractors comes from the fact that auto reviewers tend to review similar kinds of vehicles. And the BEVs are usually compared directly to their plug-in hybrid, FCEV (fuel cell EV) and regular hybrid counterparts. And to win in this comparison, BEV proponents talk about all other EV technologies as being clearly inferior to BEVs. They call out that PHEVs (plug-in hybrids) were designed originally as only bridge or transition vehicles from gasoline powered cars to BEVs.

While I agree that this PHEV transition was a key strategy in many automaker’s early EV plans. The flaw in that logic is that the move to BEVs dominating new car sales is still very far from being finished. Even now (ten years later) the percentage of new EVs sold across the U.S. is still under 5% of total vehicle sales. That leaves 95% of new car buyers still choosing to buy gas-only vehicles today. Personally, I think that there will always be hybrid and alternate fueled vehicles, and that the far bigger market for BEV fans to target is not EV hybrids, but gas powered cars and trucks which dominate the automotive and transportation industries around the world today.

Even though GM killed off their impressive Chevy Volt PHEV, Toyota is soon going to sell its new RAV4 in plug-in hybrid form. Called the RAV4 Prime, Toyota is betting that there still is a strong market (in the 95% of gas only buyers) that appreciates the EV advantage of instant power (0-60 in 5.7 sec), with the virtually unlimited range of the onboard gas engine.

Nearly every automaker is selling an electrified vehicle in their lineup today, with broadly expanding EV plans over the next few years.

I can easily imagine seeing a big oil executive laughing out loud in their huge sky rise corner office when they read another article where some BEV (battery electric vehicle) advocate puts down the idea of PHEVs (plug-in hybrids), or FCEV (fuel cell/hydrogen) vehicles. Delaying the progress of EV adoption in the meantime, without the oil exec even having to lift a hand. The petroleum industry in general doesn’t even see EVs causing any real loss in oil revenues until 2030, because EV in-fighting has done such an effective job in slowing change from fossil fuel dominance.

I think that EV supporters need to stop complaining about other EV technologies, and start supporting a united EV offensive to gain more than 5% of the new car market. And future auto reviews should work to actively compare gas cars to hybrids, PHEVs and BEVs, all together.

Do you share my belief that there is a huge opportunity for new prospective EV buyers out there? With easily enough room in today’s 95%-gas-only market to support many different EV technologies, drivetrain platforms, and alternate fuels, moving forward towards a cleaner, renewable energy future. Or do you think that BEVs are the ONLY answer to reducing our massive dependence on oil?

fasteddie2020 wrote on June 23, 2020 - 7:33am Permalink
Generating and transporting hydrogen gas looks very problematic from a cost, efficiency and pollution view point. A hydrogen-powered vehicle simply makes little sense alongside BEVs, except for hoped-for fast fueling. BEVs keep getting better, with longer ranges and give owners the convenience of starting every day with a "full tank." Soooooo simple!
DeanMcManis wrote on June 23, 2020 - 3:09pm Permalink
Like gasoline, and batteries, hydrogen has it's challenges. But it is important to keep an open mind, and not shut down alternate clean air solutions. There is easily a big enough energy and transportation market to allow for more than one single technology. BEVs are succeeding on their own merits, and I am happy to support and promote them. In the same way that Tesla and other EV automakers have been working to improve battery technologies, with higher energy efficiency and cleaner manufacturing, hydrogen production is improving as well. "The energy company SGH2 is bringing the world’s biggest green hydrogen production facility to Lancaster, California. The plant will feature SGH2’s technology, which will gasify recycled mixed paper waste to produce green hydrogen that reduces carbon emissions by two to three times more than green hydrogen produced using electrolysis and renewable energy, and is five to seven times cheaper." I expect to see battery technologies also improve dramatically in the next 5 years too.