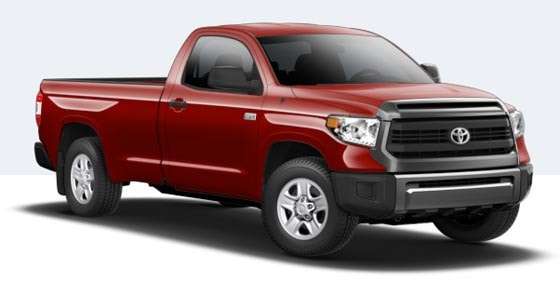 It is not surprising that Toyota is ceasing production of its two-door pickup truck starting with the 2018 Tundra, and the reasons are explicit: low profit, cost similarities between cabs, CAFE regulations and low demand.
Advertisement

It’s clear the Regular Cab has been on the chopping block for quite some time now, as its sales have been heavily declining. The Regular Cab Tundra has only been popular among fleet customers or young, single individuals, even though it is considered to be a low profit and low demand option.

Over the years, most pickups have graduated from work trucks and have become more prevalent as family transporters. Ivan Drury, senior analyst for Edmunds, explained, “Anytime you go look at a U-Haul you see these work trucks that are specifically meant for actual workers, not as recreational vehicles… If I’m going to go out and buy a pickup and I buy one with a regular cab and I have kids well guess what, it’s not applicable,” Drury said. “If I go out and spend a few more dollars on the extended or crew cab it essentially becomes your family hauler.”

In the first 5 months of 2017, Regular Cab Toyota Tundra sales fell below 1 percent. According to pickuptrucks.com," just 0.4 percent of Toyota Tundra pickup trucks sold in the U.S. left the lot with two doors. That means of 43,809 Tundras sold between New Year’s Day and May 31st, roughly 175 were regular cab models.”

With sales declining at such a fast rate, it was obvious that Toyota had to pull the plug. It was the most sound option to save money, especially since CAFE regulations change so much. According to the 2017 regulations, a regular cab truck must get better fuel economy than an extended cab because of it's smaller footprint.

Pickuptrucks.com states, "Regular cab trucks really aren't any cheaper to design or manufacture than extended cabs. Need proof? Cars.com pegs the MSRP of a new 2013 two-wheel-drive Double Cab Toyota Tundra at $28,805. A 2013 two-wheel-drive Regular Cab Toyota Tundra (8-foot bed & 4.0L V-6) is $26,450 (prices include destination). That's just over $2,000 for the extra doors, sheetmetal, a V-8 and back seats. And that doesn't include the many incentives that could bring that number much closer together.

The problem here is that building a limited number of regular cabs is costly, as it reduces the efficiency of the production line when the line has to support multiple versions of the same vehicle. Truck makers also have to design and manufacture special parts just for the regular cab — and that's not cheap. While Toyota lists the MSRP of the regular cab Tundra as roughly $1,900 lower than the double cab, it doesn't offer the same kind of incentive money on the regular cab because regular cabs aren't any cheaper to build."

It was only a matter of time until the death of the Regular Cab Tundra came into fruition.

In my 25 years of life, I don’t think I have ever seen regular cab Tundra in person. Therefore, I’ve come to believe that Regular Cab Tundras are like unicorns; they are rare, hard to find, and you wonder if they still even exist.