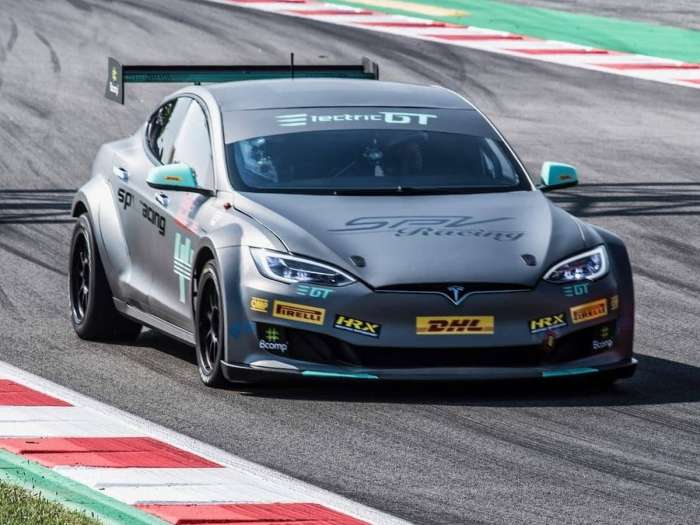 New Ludicrous Tesla Racecar is a Stripped Down Track Beast, But Will People Watch It?

A new all-electric race series is being developed - the Electric GT Championship - and the first car has been delivered. It started life as a normal Tesla P100DL, but has become an absolute monster.
Advertisement

Tesla is racing for the 21st century.

The Electric GT Championship is a racing series which is set on propelling racing into what the company calls "The Age of Light." Their events are "Festivals of our electric future." What the company says about themselves makes it clear just how optimistic they are about the future of electric cars, and an all-electric future. In the present, the first car for the series has been delivered. And compared to the road-going version, it could certainly be a herald of the Age of Lightness.

A Tesla on a Diet

Teslas, and electric cars in general, have a tendency to carry a fair bit of weight. The street version of the car weighs in at nearly 5,000lbs, about the same as your average white rhinoceros, or a full size pickup. The race version has allegedly dropped 1,100lbs, which, while still heavy for a GT Racecar--as one of the test-drivers noted--it's a substantial weight loss from the street car.

Dropping half a ton does wonders for a car. Acceleration is improved, with the 0-60 time dropping from an already shockingly quick 2.3 seconds to a quite literally ludicrous 2.0 seconds. What the losing that much weight helps with even more is the handling. The street version is not a terribly handling car, partially because the weight is very near the bottom of the car, giving it a stable center of gravity. But the weight gives the car extra momentum going into corners, which makes it more difficult to change direction.

Now, with the weight loss, the Tesla racecar can change directions much more freely, and coupled with the improved racing suspension, the car's ability to take corners drew praise from test drivers and journalists. It's also been widened and given racing brakes and tires. In nearly every way, it perfectly fits the racecar persona.

I say nearly becausethe video of the Tesla racecar lacked one thing which can lend excitement to race footage: sound. While the Tesla P100DL is being driven around the track, the viewer can hear the sounds of race-tuned engines of other cars also being driven. The Tesla, meanwhile, is silently slicing around the track, and when it pulls into the pits, the squealing racing brakes are perfectly audible in the absence of an idling gas-fueled powerplant. Its not clear how much of a difference this will actually make in popularity of the race series, but I must say that the first thrill of any motorsports event that I attend is the feeling of a race engine's roar vibrating the ground under my feet and resounding in my chest.

An Exciting New World for Tesla and All EV Manufacturers

Despite the less than impressive soundtrack, the footage shows that, with other cars competing for position, it could be an exciting new series. In particular, it will be interesting to see race variations of other manufacturers. I personally cannot wait to see Porsche's upcoming EV, the Taycan in race trim. What do you think the Electric GT Championship will be like?