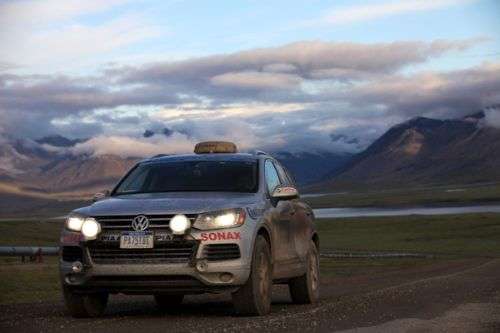 It’s called the TDI-Panamericana Challenge and it is the longest race in the world from the tip of Argentina to the barren plains of Dead Horse, Alaska at the northern edge of the North American continent. Fourteen thousand miles through grueling weather extremes and conditions; incredible altitude climbs and descents, not to mention variations in terrain that defy the imagination.
Advertisement

Rainer Zietlow and his teammates drove their 2011 Volkswagen Touareg TDI through this course in 11 days, 17 hours and 22 minutes, traveling from Texas to Alaska in just two days in the recently ambient blazing heat! Remarkably they drove non-stop an actual 16,000 miles, sleeping in the car when possible, across two continents on a single set of tires.

Zeitlow switched off with his Challenge4 drivers, Carlos Fernandez and Marius Biela, throughout the journey, which was delayed starting for two days by blizzard conditions in Argentina. Crossing the plains of Argentina, they skirted the Andes, to plow through the jungles of Central America and then across the U.S. through the Mountain states of New Mexico, Colorado, Wyoming and Montana. Finally they crossed provinces of Alberta and British Columbia to the 49th State and up to its northern edge.

Continental Tire, a major sponsor second only to Volkswagen, equipped the Challenge4 Toureg with their most innovative SUV tire to date, the versatile CrossContact LX20 with EcoPlus Technology. Through extreme weather conditions, drastic altitude changes, widely varying terrain and a route demanding top performance the CrossContact LX20s withstood the elements, guiding the drivers to their final destination — providing a believable testament to the strength and durability of the tires.

"This is an extremely proud day for Continental Tire," said Travis Roffler, Continental Tire director of marketing. "We knew our tires were up to the challenge, but this great success confirms what we've known all along — our tires are the best. This was a debut event for the CrossContact LX20 with EcoPlus Technology and it proves to our engineers who have worked so hard to perfect this tire that it's been a true success. We're dedicated to improving fuel-efficiency, safety and durability — and that's exactly what we've done here."

The CrossContact LX20 with EcoPlus Technology line will be officially launched in August. Thepremium all-season tire is designed to improve fuel economy and treadwear and surpass the competition — which it reportedly does by stopping 34 feet shorter than the leading competitor in independent wet braking tests.

The company has a lot of faith in their product, demonstrated by a 70,000 mile limited warranty including 12 months free replacement.
The term EcoPlus Technology refers to the rubber’s two main components, Tg-F polymers and +Silane. The polymers are temperature-activated increasing compound bonding, thus improving the wear and efficiency. The second component, +Silane, is an additive working to enhance the tire's grip on slippery roads and reduce stopping distances.

Zietlow and the Challenge4 team are now on their way back to Fairbanks. They will commence a road show through the Americas and Europe on July 31.