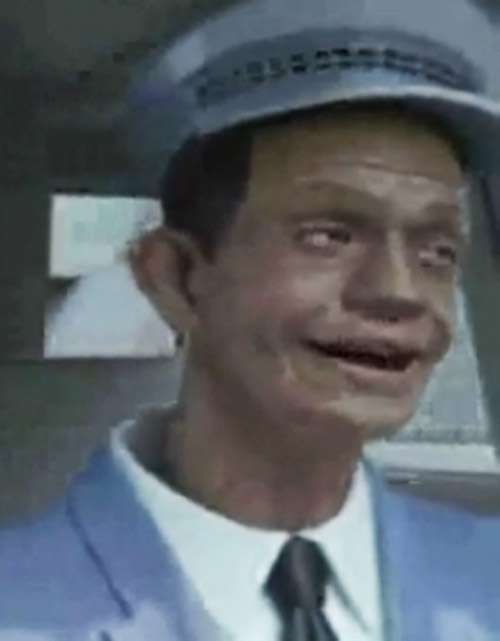 Why drivers in 2040 won’t need a license

Simply put, drivers in 2040 won’t need a license because cars will drive themselves and identification will have transformed into a device, perhaps worn on your wrist, that functions as your key to everything, your passport, plane ticket, video phone and heads up display computer.
Advertisement

Google’s attempts to create autonomous cars is both well-known and well on its way to a reality. The major impediments are simply working out all the conceivable contingencies of liability and making the technology inexpensive enough that in 27 years nearly everyone will have a self-driving car.

Most of us first encountered the concept of a self-driving car in the movie Total Recall, inspired by Philip K. Dick’s short story We Can Remember It For You Wholesale, starring Arnold Swarzenegger as Douglas Quaid/Hauser. He gets a ride from a friendly robotic taxicab called JohnnyCab. The robot driver is pictured above.

An organization called the Institute of Electrical and Electronics Engineers believes autonomous cars will be the dominant form of personal transportation in the future, comprising as much as 75 percent of cars on the road by 2040.

In pursuit of this future, several manufacturers, including General Motors, Audi and BMW, are already testing autonomous vehicle systems.

Alan Taub, vice president of global research and development for GM, stated in a 2011 news release, the brand could have robotic cars available by 2020.

Google tests have involved a modified self-driving Toyota Prius, and Nevada actually issued the first license to an autonomous vehicle last May, on behalf of Google’s experimental model, enabling further testing in that state.

A Bee in the Bonnet
Self-driving cars use radar, GPS location plus built-in cameras to find their way.. Data describing obstacles, traffic signals and lanes plus information from signs goes into the vehicle's computer – this is used to compute a route, taking into consideration many more variables, such as current traffic and elevation gain or loss, than the world’s greatest mental wizard ever could. Adding new data as it navigates the route, the robotic car can even drive safely in unfamiliar territory.

We’re just guessing, but big 4X4’s that’ll cross the Continental Divide on a dicey four-wheel-drive road, while you catch a few Z’s in a backseat hammock, may be a bit further off than autonomous passenger cars. Besides, who would want to sleep crossing the Great Divide that way?

Transforming travel
Initially the tired old bugaboo of inadequate infrastructure raised its ugly head as the main reason self-driving cars would not work. Though it might be possible to construct a road to fool a robotic car, the degree to which they can navigate the roads of today is phenomenal and will only improve as cars begin to talk to each other and learn to use automotive etiquette above and beyond anything mankind has ever mastered.

Because autonomous cars can be set to follow at a set distance, mimicking the actions of the car in front, individual passenger cars will be able to form high-speed trains – achieving speeds safely in tight formation that would be thought reckless today – or a level of precision driving rivaling the flight maneuvers of the Blue Angels.

“Because self driving cars will be separated by sensors, they will be able to safely travel on highways, even moving at speeds of up to 100 miles per hour,” according to Dr. Aberto Broggi, an institute senior member and professor of computer engineering at the University of Parma in Italy.

Since the only requirement is being able to relay a desired destination to the vehicle, in theory, anyone will be able to use a car, regardless of age or ability. Shoot we have known people whose pets could probably operate these cars!

At which point, what good is a driver’s license?

We can even envision a toddler, if able to open the car and say Grandma, being whisked away on their own, except for the obvious safeguards that would prevent this from happening. Kids are hard enough to keep track of now!

Getting back to the future
Getting some drivers to accept self-driving cars will be a challenge, stated Jeffrey Miller, an institute member and computer systems associate professor at the University of Alaska Anchorage.

Drivers may be reluctant to give up control – we know people who can’t even ride buses or planes without serious stress attacts. Others would rather be driven about anyway and will gladly give up what is to them simply a chore.

That’s why the new blind spot alerts, rear traffic alerts, adaptive cruise control, lane keepers, doze alerts and so on are conditioning us to rely upon our vehicles more. Chances are it will happen so slowly we will be like the bullfrogs in a slowly warming pan of water – the idea of jumping doesn’t even occur to them.

Shucks, some cars will even park for you right now – that’ll teach you to trust your car by doing something well many people don’t even like to try – parallel parking.

Would all of this innovation happened anyway or as quickly without the CAFE requirements? We will never know for sure.

Tesla Contemplates A New Strategy for China Retail even As Sales Boom
Jay Leno on Elon Musk & EVs: “I Think He Should Get ... Credit"
END_OF_DOCUMENT_TOKEN_TO_BE_REPLACED