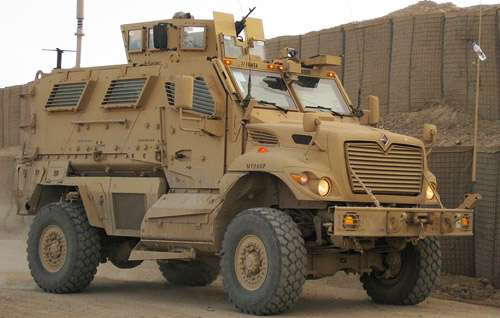 Volkswagen and Fiat would both like a piece of the considerable U.S. commercial vehicle market, a significant share of the sales projected to reach 21 million vehicles worldwide by 2015.
Advertisement

The New Albany OH based Commercial Vehicle Group just announced first quarter sales totaling $237 million and they’re just one player in a wide field of competitors. That's just a hint of the total value of the US market.

The Navistar International Truck and Engine Corporation is located in Lisle, IL and has been a manufacturer of medium and heavy trucks as well as mid-range diesel engines since its founding in 1902. Some may remember the company by its former name of International Harvester. They are the prime supplier of MRAP vehicles to the U.S. military.

In 2010, Navistar entered a joint venture with Mahindra International for the Asian market. Now the company is struggling, announcing a $172 million first quarter loss just last week. Simultaneously, the 5,000th truck built by the joint venture rolled off the line at the production plant in Maharashtra, India. Despite the loss, six vehicle launches are slated over the next year and a half.

Volkswagen, with its two commercial truck lines in Scania and MAN, is reportedly considering an investment in Navistar to gain a beachhead in the US commercial vehicle market.

At the same time, Fiat with their commercial vehicle called Iveco is also believed to be interested in Navistar, which would improve their position in the US market. Either possibility could be disadvantageous to Mahindra International, according to a post by Swaraj Baggonkar on the business-standard.com earlier today.

The Indian firm sells trucks ranging from a half ton to 1.5 tons under its own name as well as commercial passenger vehicles. The company’s larger products are marketed under the name of Mahindra Navistar.

A change in the ownership of Navistar could potentially disrupt Mahindra’s business plan for the heavy commercial vehicle market, as new products and an expansion of their fabrication facilities were slated based on added investment.

The two companies also had designs on the market for luxury touring buses, small commercial vehicles and expansion into export markets. The joint venture also makes the Maxxforce engine, but has yet to turn a profit.

Volkswagen is a small player in the Indian market and so a stake in Navistar would improve their stance in both Asia and America.

Fiat sells most of their commercial vehicles in Europe and Latin America so an investment in Navistar could potentially open up two continents to their revenue stream.

Volkswagen also announced today a significant investment in India had been put on hold due to a tax dispute with the Maharashtra government.

Aaron Turpen wrote on June 19, 2012 - 1:48am Permalink
Navistar just had another blow earlier this month when a federal panel of judges ruled against the EPA's exception given to the company to allow Navistar to continue producing non-compliant Maxxforce engines. When Navistar's emissions credits run out (which they are about to), they'll be forced to shut down production unless they've got a compliant engine to continue with. If anyone buys a stake in Navistar, they'll have to figure out how to get the Maxxforce online or how to refit all of the proprietary vehicles to begin using another, compliant engine. The 3-judge panel specifically said that the economic situation of Navistar is not of concern to the EPA and should not have been a reason for the exemption. Things aren't looking good for that company right now.