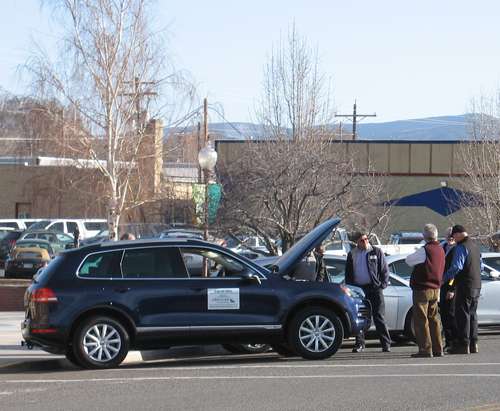 A current report before the Virginia house of delegates suggests a tax on diesel fuel nearly double the levy on regular gas, aimed at compensating the state for the damage 18-wheelers do to the roads, but perhaps unfairly penalizing the 250,000 citizens who will soon drive diesel passenger vehicles.
Advertisement

The Conference Report to the Transportation Funding package sets the wholesale gasoline tax at 3.5 percent but 6 percent on diesel fuel. The weight of semi-trailer and other commercial trucks is damaging to asphalt paving in particular, but should those who are helping to clean the air and lessen America’s dependence on foreign oil by driving more efficient vehicles be penalized for their efforts?

If passed, this legislation would effectively tie diesel drivers to an economic whipping post.

The Diesel Technology Forum (DTF) has taken issue with the disparity in the tax rates. In a letter to the Speaker of the Virginia House of Delegates and other members, DTF Executive Director Allen Schaeffer charged the options now being considered would create an unfair and substantial disparity between gasoline and diesel fuel.

“It directly penalizes Virginians who drive fuel-efficient clean diesel passenger vehicles and is a disincentive to investing in clean diesel cars in the future,” Schaeffer said.

“It seems illogical to impose a higher tax at the pump on an increasingly popular technology that is 30 percent more energy efficient and has lower emissions than gasoline, but that is exactly where we’re headed with this plan,” Schaeffer explained in his letter to the Delegates. “Diesel fuel is no longer a fuel used only by commercial trucks yet this plan effectively treats it as one and the same, and that price at the pump disparity will discourage consumers from investing in these cleaner more fuel efficient vehicles.”

However, diesel has always cost more than gasoline, and its improving efficiency could easily offset the added price. Given the number of gallons commercial and overland carriers consume, the action would indeed generate a lot of money for highway maintenance and repair, benefiting all Virginians with better roads.

The price of diesel fuel in the Mid-Atlantic states as of Feb 18 was $4.25 while gasoline was $3.78, according to the US Energy Information Administration. By national average the taxes on gasoline are 13 percent and 12 percent on diesel fuel.

Today there are only 81,000 Virginians who own diesel powered passenger vehicles. The quarter million number is a projection of the number of diesel car owners there will be in 2020, over six years from now.

Schaeffer also invoked former U.S. Transportation Secretary Ray LaHood who stated, "If one-third of all vehicles in the USA were already clean diesel vehicles today, we would be saving 1.4 million barrels of oil every day. That’s the same amount of oil we import from Saudi Arabia, so this is a big deal.”

Nevertheless, Schaeffer is correct in asserting that diesel fuel is no longer a fuel used only by over-the-road truckers, as more and more Americans are finding them acceptable.

During the 2012 Colorado Green Car Convoy the diesel-powered VW Touareg (shown above) generated a significant amount of interest among those present.

The DTF proudly points to the inherent energy efficiency of diesel cars and pick-ups that achieve 20 to 40 percent better fuel economy than a comparable gasoline vehicle. His assertions that such vehicles are cleaner than all modern gasoline models in both particulates and CO2 is slightly exaggerated however.

“Replacing 15 percent of the fleet with diesels would reduce greenhouse gas emissions by 190 million tons over the estimated vehicle lifetime and save 17 billion gallons of fuel,” he added.

“We are concerned that the fuel tax disparity proposed in the final transportation funding package could have the unintended consequence of discouraging the purchase of fuel-efficient clean diesel vehicles that are already reducing fuel consumption and improving air quality throughout Virginia. We wanted to be sure you were aware of this matter and hope that clean diesel technology is not treated unfairly in Virginia,” Schaeffer concluded.

The Diesel Technology Forum is a focused lobby aimed at increasing the sales of diesel fuel and the adoption of clean diesel technology, so we’ll forgive them for perceiving their product through glasses with a slightly rosy tint.

Ultimately, we sincerely agree buying a diesel passenger vehicle should not be grounds for being tied to the taxation whipping post.

Virginia should give this legislation a bit more consideration.