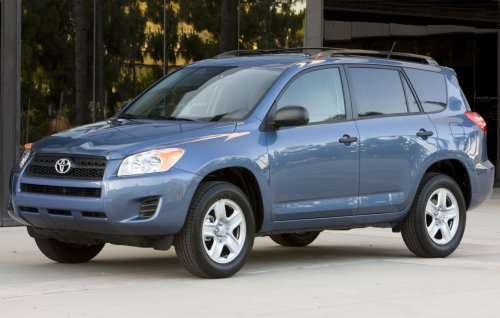 No other Toyota or Lexus vehicles are involved in this voluntary recall, which concerns the possibility of a rear suspension arm failure resulting from improperly performed maintenance functions.

Toyota has discovered if the rear suspension arm nuts are not tightened properly to torque specifications during rear wheel alignment service, excessive play may occur in the threaded portion of the arm, leading to rust formation. The potential consequence is wear on the threaded portion of the suspension arm may cause the arm to work itself free.

The same problem affects both the specified RAV4 and HS 250h vehicles.

Toyota is currently working on a solution to the problem and will notify registered owners by mail when the correction is available. They will then advise owners to make an appointment with an authorized Toyota or Lexus dealer to get the problem repaired at no charge.

This marks the 13th recall of Toyota vehicles from 2011 and later and the second this year covering the popular RAV4. The previous safety issue involved side and window airbags, but involved less than 500 vehicles.

Despite the recalls or perhaps because of this myopic focus on safety, Toyota is once again the best selling automotive group in the world. Their legendary reliability, incredibly demonstrated in the unbelievable tests BBC’s Top Gear put them through, is no small part of that achievement.

You may recall the episode in which they took a Toyota Tacomo pickup (an old one) and immersed in the North Sea overnight. After drying the contacts and components, with a look over by a mechanic, they started it up and drove it away.

Then they placed the same pickup on top of a building scheduled for demolition. After the building came down the Toyota was on top of the rubble, but upside down. If memory serves they flipped it back over, had to reconnect the battery cable and AGAIN, drove it away.

That is the kind of publicity that makes Toyota’s reliability legendary.