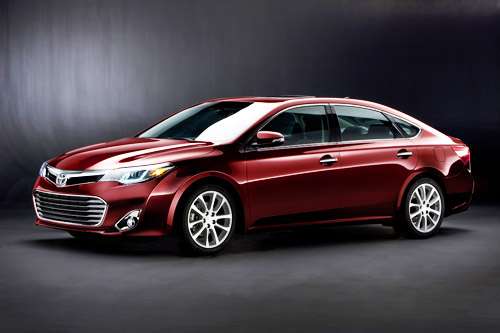 Bob Carter, Group Vice President and General Manager for the Toyota Division, narrated the Press Day debut of the beautiful new car, mentioning the fact New York is the home of the oldest and longest running auto show in the U.S. Where a city of 12,000 taxis and 800 miles of subway tunnels stands in monumental tribute to the freedom and innovation cultivated by personal transportation and mobility.

“This is, without a doubt, the most beautiful car I’ve ever seen in the 20 years I’ve been with Toyota,” Carter beamed. “I get goose bumps every time I look at it, and I think Akio does too. The first time we showed it to him he said, ‘Cool! Don’t change a thing.’ That kind of reaction from the boss gives us incentive to develop more models here for the American market.”

The 2013 Toyota Avalon has a sweeping silhouette in some ways similar to the 4-door coupes that have hit the automotive scene recently. The new look is a product of the youthful and highly creative team at the Calty Design Research Inc., based in Southern California and Michigan. Given its general visage, the sedan’s engineering was implemented by the dedicated efforts of a group based at the Toyota Technical Center in Ann Arbor, MI.

The new 2013 Toyota Avalon rides on new MacPherson struts with advanced valving and rebound springs to find the sweet spot between handling, agility and overall comfort. The coil spring rate plus front and rear sway bar stiffness have been increased to improve body control and roll. The electric power steering system was tuned to deliver crisp controllability and surprising agility while also providing superior tracking.

Like most of the cars in the Toyota corral, the new Avalon features the three drive modes we've become accustomed to finding, namely Normal, Eco, and Sport.

The new look can be stated to a degree by noting it is a bit more compact with a sloping roofline, flared fenders in front and shorter front and rear overhangs.The new Avalon stands a bit shorter in shoes better suited to its style. New 17-inch and 18-inch alloy wheel and tire combinations complete the look of the lovely sedan.

“The car rides on 111-inch wheelbase with V6 power and excellent mileage,” Carter said. “We will tell you more about powertrain advancements later this spring.”

Carter could hardly disguise his joy as he spoke about the new sedan’s interior.

This once sedate and dignified sedan even features paddle shifters, signifying the exploration of its second adolescence. Naturally, being a Toyota, it has an unmatched list of high tech safety features, including 10 airbags, plus a blind spot monitor with cross-traffic detection and a pre-collision system.

The roomy interior features bolstered seats and the passenger side dash is concave, creating a wonderfully open feeling. Meanwhile the cabin has greatly enhanced reduction of wind, engine and surface noise like a true luxury car. In fact, as the brand’s flagship model, the 2013 Toyota Avalon may have crossed the premium car threshold.

“It’s the first vehicle in Toyota’s U.S. line to have Akio Toyoda’s thumb print for a new direction in exciting products,” Carter said near the conclusion of the presentation. It’s the beginning of a new era for vehicle development in the U.S. for the American market and it’s the new flagship of the Toyota brand, which will go on sale later this year.”

It’s been years since we’ve driven one of these stately, comfortable cars – it seems the time to do so may have come again.