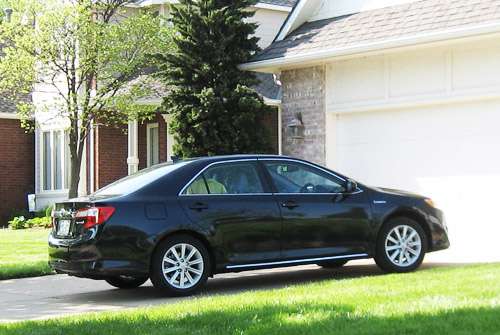 Today’s vehicles are built in the global market and most contain parts from around the world. That’s why the Toyota Camry can be More American than the Ford F-150 that’s built in Ft. Wayne IN, but of only 80 percent domestic parts, according to SciTech.
Advertisement

The Big Three build some in other countries while foreign brands build more and more of the cars and trucks they sell right here. Toyota builds over 100,000 vehicles in the US to sell in 19 different countries annually. Not a big number but a big change in the global economy, resulting from the high value of the yen compared to the dollar.

The Camry is among the vehicles built by Toyota’s Georgetown, KY plant. It was named in the Cars.com annual American-Made Index. It is the fourth consecutive year the Camry has been the top car.

The Ford F-150 has only recently been added to the top of the list and fell short of the Toyota Camry by a very narrow margin.

"When people think about buying an American car, they might just think automatically of the Detroit Three," said Patrick Olsen, Editor in Chief at Cars.com. "In reality, this classification isn't as cut and dried as it used to be. Today, Fiat owns a majority stake in Chrysler, companies like Toyota are increasing production of their vehicles in the U.S. and parts are coming in from all over the globe. Our index accounts for all of these factors to determine where vehicles rank."

Cars.com adds input from aspects that could skew their listings, however, in the eyes of some. Such as how long they tend to remain on the sales lot – not really part of the vehicle’s content and assembly.

"U.S. sales are a component of our index for a number of reasons," said Olsen. "For one thing, it's safe to say that the more a vehicle sells, the more U.S. workers are involved in production and delivery of the vehicle and the more U.S. dealers are profiting. Additionally, we think it's valid to give credit for how American buyers embrace a vehicle."

Toyota, Honda and General Motors took eight out of the10 vehicles listed between them. General Motors took sixth, nineth and tenth with the Traverse, Acadia and Enclave built in Lansing, MI. In addition to No .1, Toyota also placed fourth and seventh with the Sienna and Tundra. The Honda Accord was bumped to third this year by the F-150 and the Pilot took the fifth place. Chrysler's Jeep Liberty made its debut on the American Made Index for the very first time.

"For most car shoppers, how American a vehicle is doesn't impact their final purchase," said Olsen. "However, according to a Cars.com survey we conducted in May, nearly 25 percent do prefer to buy American and nearly half of those people would be swayed to buy a foreign make if they knew it was assembled in the U.S. We do our index every year to make sure shoppers who do factor this into their purchase decision have the right information."

Notably, the Ford F-150, Jeep Liberty and Buick Enclave didn’t even make the cut last year so things may be looking up for the Big Three once more.

In any case, it’s a good thing it makes sense to build cars in America again.

Note: The models selected in the American-Made Index exclude hybrid variants of the cars listed. The model pictured above is such a hybrid variant of the 2012 Toyota Camry.