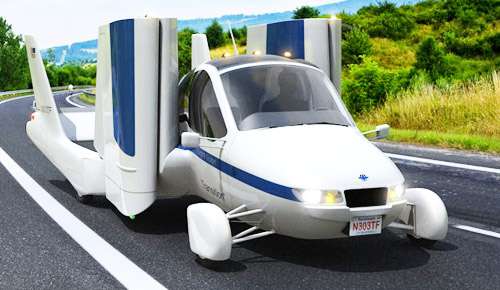 Terrafugia's flying car will spread its wings at NYIAS

Terrafugia's flying car can be parked in your garage, driven to the airport, spread its 20-ft. wingspan, and with proper clearance, climb into the wild blue yonder.
Advertisement

Developed by a cadre of aeronautical engineering grads from MIT, the Terrafugia flying car has been a work in progress since 2006. There production prototype, The Transition Roadable Aircraft, will make its public debut to predictable interest at the 2012 New York International Auto Show.

The governmental and industrial safety tests a new car is required to pass are considerable. To produce a vehicle that can pass not only automotive criteria, but make it through the Federal Aviation Administration’s trials and tests as well is an engineering and fabrication accomplishment of Herculean proportions.

“We are thrilled to have Terrafugia at the Show this year. “ stated NYAIS director Alan Liebensohn, “The Transition is a truly unique vehicle that represents an enormous step forward in how we view personal transportation and individual freedom. We know it will be a huge crowd pleaser.”

The flying car could be considered one of the first real world Transformers in its functioning dual role. The Transition prototype will be revealed along with information on Terrafugia’s plans for the future. They already have 100 orders for the winged automobile on the books.

“We selected the New York International Auto Show to continue the roll-out of the Transition because of the value this show brings in terms of exposure to future owners, investors, and partners,” said Anna Mracek Dietrich, COO of Terrafugia. “The NYIAS is a venue from which we can show the first practical street-legal airplane to the world while meeting the people who will be part of its commercial success in the years to come. New York is the perfect place to accomplish all of this.”

The public will be able to see the flying car up close along with wing folding and unfolding demonstrations. Videos of the Transition in flight will herald the future of personal transportation in this ever-changing world.

Terrafugia is based in Woburn, MA and was founded by pilots and engineers supported by an elite network of advisors and private investors. The name comes from a Latin phrase meaning “escape the earth.” Terrafugia seeks to deliver revolutionary, yet practical air and land vehicles engendering freedom, flexibility and fun.

The FAA classifies the Transition flying car as a Light Sport Aircraft.

Nicolas Zart wrote on March 3, 2012 - 9:19pm Permalink
Call me optimistic and wishing for the best but I think this time they have got it right. I would love to take one of those for a test drive and flight...