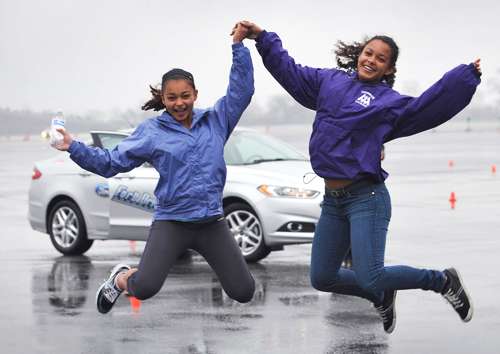 Though teen drivers may have misconceptions about some aspects of driving, it is their parents who are more likely to have hypocritical attitudes.
Advertisement

That’s because the great majority of teens and their parents equate all forms of distracted driving with drunk driving, mature adults are the ones more likely to check their phones while driving by a factor of 40 percent.

The latest study of teen driving habits and perceptions was commissioned by Ford, and implemented Penn Schoen Berland. The survey polled both teen drivers and their parents, revealing some startling insights to this unending issue.

Summer is a great time for most teenagers, especially for those with vibrant interests, social circles and the wherewithal to indulge them. Surprisingly, more than half of both groups believe winter is the most dangerous time for teens to be driving.

Actually, summer is a much greater threat to teen drivers despite the worse conditions winter can sometimes bring to the roads. According to records compiled by the NHTSA from 2007 to 2011, summer is much more dangerous time for teens.

Facts of Distracted Driving
In the new survey, teens admitted engaging in the following potential distractions while driving:

• 61 percent eat or drink (non-alcoholic beverages) while driving – something many of us have done before, but the world keeps getting more dangerous

• 51 percent listen to an iPod or MP3 player, which is fine except they mean with earphones or earbuds, thus omitting the audio cues from threats to safety like sirens, train whistles, etc.

Despite this only 26 percent of parents utilize a device to enforce rules or restrict phone usage for teens that drive. Ford’s MyKey technology, is readily available on over 6 million Ford and Lincoln vehicles in the US, and limits distractions and focuses attention on safe driving habits.

Perceptions of Gender
• Teenage girls are considered safer drivers by both teens and parents, according to the study

• Girls are thought more likely to use their phones when driving, said 81 percent of boys, 78 percent of girls and 67 percent of parents

• Boys are much more likely to speed, according to 81 percent of girls, 77 percent of boys and 75 percent of parents

The survey also found that despite being generally better drivers overall, parents are 40 percent more likely to check their phones while driving than teenage children (28 percent of parents versus 20 percent of teens).

Ford will train 40,000 new drivers this year via the Ford Driving Skills for Life program, which reaches out to over 40 high schools in eight states.