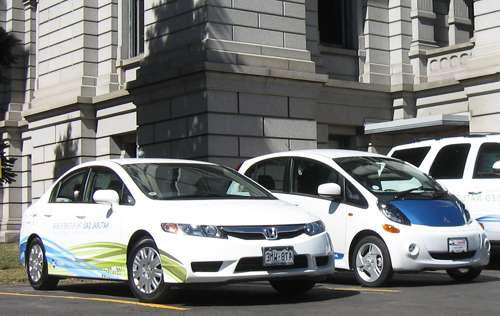 The surprising efficiency gains of autos in the US during 2012

If the EPA estimates for fuel efficiency and greenhouse gas reductions for 2012 ring true, the US improved automotive mileage rates last year by the largest increment since 1975.
Advertisement

Though the data was slightly skewed by the impact the Japanese tsunami had on sales of the most efficient vehicles last year, resulting in a slight lessening of efficiency during 2011, the results otherwise shows an improving outlook since 2004. Fleet overall fuel economy is projected at 23.8-mpg for 2012, up from 22.4-mpg in 2011.

From the 1980s through the 1990s, as America fell in love with big, gas-guzzling and ever heavier SUVs, fuel economy took a beating. Some of the improvement results from passenger cars taking a few points away from SUVs, trucks and vans in the overall market.

One highlight of the report is the reduction in CO2 emissions, not just last year, but since 2007. Preliminary values for 2012 are 374 grams per mile of CO2 emissions, which, if achieved, will set an all-time record as the largest single year improvement since 1975.

The report further cautions that other factors have had an effect to increase the volatility of the trends, including the economic recession of 2009, unstable gasoline and diesel prices, and also the tsunami’s effect on Japan-based manufacturers.

Consequently the EPA used a 5-year time frame, and took 2006 and 2007 as base years due to the lack of market volatility then. Between 2006 and 2011, CO2 emissions dropped by 10 percent while fuel economy increased by 11 percent. The EPA’s preliminary estimates indicate CO2 emissions have decreased 13 percent coupled with a 16 percent fuel economy boost from 2007 to 2012. The improvements have been essentially improving since 2004 marked a turning point.

The EPA points out the role technology is having on these trends, noting that variable valve timing and multi-valve improvements are found on 90 percent of 2012 vehicles, a process taking 20 years since the initial development.

Direct injection is now used in roughly one quarter of all cars while turbocharging is found on about 9 percent of vehicles, about the same penetration as cylinder deactivation technology.

The small market percentage of the hybrid, though still negligible has more that doubled in the last year, while transmissions are increasingly 6 speeds or more, standard on up to 75 percent of 2012 vehicles.

Also cited is the growing number of higher mileage vehicles with lower emissions. The number of SUVs, pickups, minivans, and vans with combined EPA ratings of 20 mpg or over are up by 71 percent – 38 in 2007 to 65 in 2012.

Nearly three times more SUVs get a combined mileage of 25-mpg or more while there are six times as many cars getting 30-mpg or better. The number of cars achieving 40-mpg and above has increased from 2 in 2007 to 15 last year.

The growth in the availability of alternative fuel vehicles is also encouraging with the advent of about two times as many hybrids and diesels in the market, along with a number of new EV, PHEV, CNG and fuel cell vehicles. Notably, the fuel cell vehicles are only available in California at this time.

Another positive indicator is the fact that many cars being sold right now already meet CO2 standards that will not come into effect until 2016, roughly 25 percent on the road. It is relevant to note that CAFE requirements are not set for individual models but for a manufacturers entire line of vehicles on average.

Consequently, half an automaker’s products would have to offset the shortcomings of the rest of the lineup. Nevertheless, it is good to see about 20 current vehicles that meet the standards set for 2025 already.

Finally, in the process of boosting fuel economy, something all brands seem to be accomplishing, lessened CO2 emissions result from that process.

Encouraging as the EPA report is, the years to come should see these numbers increasing at an ever-growing rate until the standards set for 2025 are not only met, but exceeded.