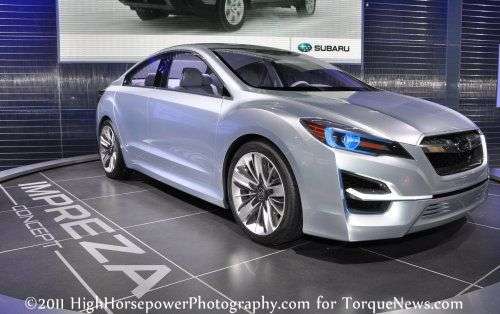 The leader in Variable Cam Timing (VCT) works with Subaru to enhance performance of the 2.5 and 2.0-liter engines, increasing fuel efficiency from 4 to 10 percent. BorgWarner adds improvements in the Cam Torque Actuated (CTA) aspects of the system and also qualify the vehicles for Super Ultra Low Emissions Level (SULEV) designation.
Advertisement

BorgWarner's CTA technology has a new mid position lock and was named as a finalist in the 2011 Automotive News PACE Awards. First launched on the Forester, the boxers are expected to become Subaru's standard engines.

The PACE Award is an annual designation celebrating breakthrough technology produced by an automotive supplier.

BorgWarner will manufacture its VCT technologies for Subaru at its facility in Aoyama, Japan.

In contrast to traditional cam phasing methods, which usually use oil pressure to phase the camshaft, BorgWarner's patented CTA technology utilizes torsional energy in the valve train to phase the camshaft, like a hydraulic ratchet. CTA cam phasers operate faster under a broader range of speeds and temperatures than pressure activated cam phasers, causing engines to run more efficiently at all speeds with quicker response.

Conventional systems default to one extreme of the phaser's range of angular travel. Calibration strategies are limited by the restricted travel designed into a variably timed system.

BorgWarner's mid position lock technology defaults at an intermediate position to allow for a greater range of travel and more control over airflow to improve fuel economy, function and efficiency. A patented hydraulic circuit passively moves the system to the mid position for reliable repositioning in any potential engine operating condition.

Toyota vs Tesla: Which Stock To Buy These Days
For Some Former Daimler Managers Daimler Is Authority, While Tesla Is Like a Startup
END_OF_DOCUMENT_TOKEN_TO_BE_REPLACED