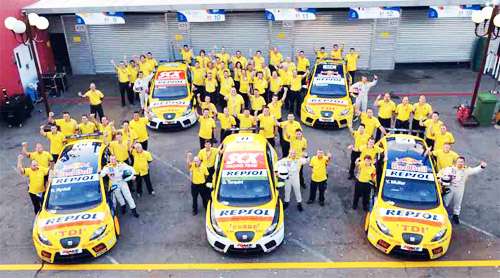 SEAT, the only fully capable automaker in Spain, has confirmed their intention to move aggressively into China’s auto market, pursuant to their enthusiastic reception at the Beijing Auto Show and the opening of eight showrooms in the Asian nation last month.
Advertisement

Sporty vehicles with a wide degree of functionality are reportedly enjoying a significant increase in popularity in Mainland China. After the launch of the Leon, SEAT courted the rapidly growing Chinese car market by revealing the new Ibiza CUPRA Concept at the Beijing Motor Show. The CUPRA Concept is a near-production teaser for the new generation of the Spanish brand’s sporty icon.

It will feature either a 2.0 turbocharged direct injection (TSI) engine, delivering 211 hp or a diesel-burning 2.0 TDI CR 170PS producing over 350Nm of torque, and remarkable efficiency 55.4-mpg with relatively low emissions.

The engine of choice is coupled to either a 6 speed manual gearbox or a state-of-the-art Direct Shift Gearbox (DSG) automatic. Add to this XDS, the latest thing in stability technology, allowing the driver to power through corners with authority.

Other notable features include the fuel capacity of a motorcycle at 5.5 liters and a curb weight of roughly 2,900 lbs.

SEAT also showcased the award-winning Alhambra. After market data gathered during the auto show, the Alhambra may join SEAT’s Chinese line-up during 2013, as another import model produced in Europe.

"SEAT has arrived in China.” Said James Muir, Chairman for the brand. “We are launching our success story in this market with our state-of-the-art, attractive city showrooms and with the SEAT Leon as the entry model. Here in China, we are observing a groundswell of increasingly discerning customers that want to differentiate themselves with their cars. SEAT stands for emotional design and state-of-the-art engineering, for guaranteed driving fun mile-for-mile. Our unique combination of design and performance, of technology and precision secures an enormous potential for us within this key marketplace."

This theme carried through the new showrooms in China and scheduled for worldwide deployment. The cities receiving new SEAT showrooms were Changsha, Chengdu, Chongqing, Nanjing, Shenzhen, Suzhou, Wuhan and Zhengzhou.

The SEAT China dealer network plans to expand further over the next few months, expanding to 15 dealers by the end of 2012. Showrooms will open in Guangzhou, Hangzhou, Nanning, Xi’an, Xiamen, Beijing and Shanghai this summer.