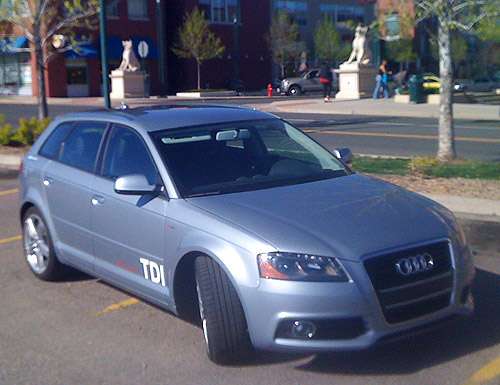 Driving the 2012 Audi A3 TDI daily last week revealed it to be a comfortable if still compelling Eurowagon with performance and efficiency perfect for the commuter with a primarily intercity work routine, like exburb residents who regularly drive to and from metropolitan suburbs.
Advertisement

The 2.0-liter turbocharged 4-cylinder diesel engine produces 140 horsepower emboldened by 236 lb.-ft. of torque, making it a dedicated climber suitable for those rugged mountain dwellers that commute from Bailey or Conifer to the Denver Metro Area daily.

Interestingly the accelerator is tuned so that if depressed normally the 2012 Audi A3 TDI is happy to play the role of an ordinary underpowered small car. Then again, if you attack the go-pedal with a little bit more sincerity, it will happily take the six-speed S-Tronic through the first two gear shifts quite quickly, essentially getting you to highway merging speed within a moderate four count.

Even though the manufacturer’s stated zero to 60 time is only 6.9 seconds, the 2012 Audi A3 TDI has no qualms about leaping off the porch and running with the big dogs on the interstate highway.

We managed to get approximately 36-38 mpg during 300 miles of city and mountain highway driving. The bolstered leather seats are comfortable and feature a four-way adjustable lumbar support. The information system provides date, time and temperature prominently and the Sirius Traffic feed is a much-appreciated asset.

An optional three-spoke steering wheel made the steering column wands that control turn signals, wipers and cruise control somewhat difficult to read, but were eventually assimilated with a little time behind the wheel. We were surprised to note the gas gauge failed to indicate which side the fuel intake is on, that the sun visors were not extendable (as all should be) and that you have to buy a different cord from Audi for various devices you might want to hook up, like iPhones, Androids, iPods etc.

The cord provided stated bluntly it was not intended to hook up my iPhone, but I was able to synch up via Bluetooth. Still, I could not play my iTunes files via Bluetooth, but found my old one-gig iPod Nano matched the connector and consequently listened to some tracks not recently heard.

The 14-ft car is easy to park, provides stable front wheel drive traction in the rain, even on summer tires, and delivers excellent maneuverability, thanks to excellent traction, tracking and cornering.

The Bose Surround Sound Concert system provides superb audio reproduction, the navigator is user-friendly and well displayed plus the Sirius subscription is free for the first three months of ownership.

We were delighted with the many and varied storage niches in the doors, console, center armrest and glove box.

Interestingly, when we reviewed the VW Jetta TDI in March, unleaded gas was just $3.09 and diesel was about $3.89 most places. Last week the best prices in Denver for regular were around $3.69 and diesel was still $3.89 at the lower priced stations. Consequently, though diesel is usually more expensive, as unleaded prices have risen over the past few months diesel costs have remained fairly stable, making it sensible for those who depend on reliable budgeting.

The EPA rates the efficiency of the 2012 Audi A3 TDI at 30-mpg in town and 42-mpg on the road, though as we have previously pointed out, diesel cars tend to outperform the EPA tests due to the manner in which they are determined.

Much to our surprise, the TDI engine is the cleanest of any engine you can get in this model, scoring 7 of 10 for CO2 and 5 of 10 for particulates, gaining designation as a SmartWay vehicle.

The 2012 Audi A3 TDI is rated good by the IIHS for front, side and rollover impacts.

The base price is $30,250 and the model we tested had roughly $7K in added options which included navigation, Bluetooth, audio, seat, headlight, trim, windshield, mirror, suspension and wheel enhancements. If you will note the picture above the 18-inch tri-spoke alloy wheels do look sharp.

The metallic finish, along with delivery and destination charges, brought the total price to $38,050, which still seems like a lot of car for the money.

The Audi warranty provides 4 year/50,000-mile limited new vehicle coverage, plus 12-year limited protection against corrosion perforation. Audi picks up the tab for your first scheduled maintenance during the first year and a third-party has been selected to deliver a 4-year roadside assistance program.

Nevertheless, if you do a lot of highway driving and want to cut your petrol costs this little Eurowagon is well worth a look. If you’re ready to get off the porch and run with the big dogs, you could do a lot worse than the 2012 Audi A3 TDI.