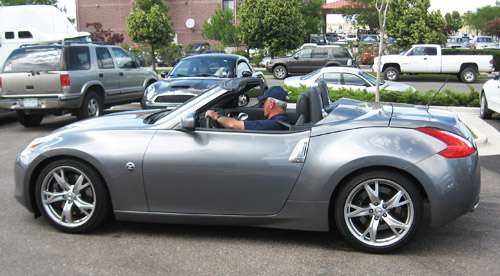 The second day of the Third Annual Rocky Mountain Driving Experience began with a drive to High Plains Raceway, after another scrumptious breakfast courtesy of Subaru, represented by Sean Maynard. Subaru brought the 2013 BR-Z to the track with such positive response it was difficult to find the new model with an empty driver’s seat.
Advertisement

To get to the track, we each selected our next Ride and Drive vehicle and I found myself comfortably behind the wheel of a 2013 Jaguar XJL, which I had briefly driven two weeks ago at the Jaguar Alive event. One significant difference – this was the 510 horsepower supercharged Supersport model that can go zero to 60 in 5.4 seconds.

The XJL made a fitting compliment to the Audi R8 V10 and Audi R8 Spyder as we traveled along I-70 east as a group. In this car not only are the seats covered in fine leather, with leaping Jaguars embossed in the headrests, but even the headliner is leather. A chrome leaper adorns the smart key as well.

The Jaguar XJL Supersport is a consummate touring sedan, but not truly suited to the track. Though it will rapidly accelerate to high speed, its size and weight make it hard to brake and slow compared to a true track star, according to those who drove it on the track.

If one is not deeply experienced at track driving it involves something of a learning curve. Last year’s track experience began with the Jaguar XFR, which was a fabulous track car, but one that should have been held to later in the day after becoming reacquainted with the configuration of the course and track driving itself.

Now with two RMDE events under my belt, it behooved me to start off with the smaller vehicles, working my way up to the larger more high-powered vehicles. So the first outing was in the Kia Optima TGDI.

This peppy little sedan gets 274 horses out of a 2.0-liter, 16-valve inline 4-cylinder engine with gasoline direct injection. At the same time it manages to deliver 22-mpg in town and 33-mpg on the open road.

It is not EPA rated for track driving but we found the four-banger could accelerate the 3,385 lb. KIA rather quickly, able to surpass 95-mph on the track’s long straightaway.

With a wheelbase of 110.1 inches, the Optima SX took the turns quite well – thanks to independent MacPherson struts, coil springs and anti-roll bars in front with multi-link suspension in the rear along with the same springs and anti-roll components. The only shortcoming the track revealed was braking not quite up to this type of driving, but the SX should prove adequate stopping on city streets, where one doesn’t usually need to brake hard from 95-mph to take a turn.

All in all, it was great fun to drive around the track and a good way to become reacquainted with its configuration. Expecting a small step up, the next car selected was the low-slung, sexy Lexus CT-200.

A hybrid vehicle with such a low center of gravity performs very differently from other cars on the track, but frankly, with quick adjustments to seats, mirrors, helmet and being somewhat fascinated with the CT-200’s unique smartphone dock, we failed to notice what drive setting the hybrid was in.

Fellow TN contributor Aaron Turpen said when he sat in it, the drive setting was in ECO, which could explain its unusual track run. So we reserve judgment on this remarkable urban runabout until a later time.

Moving up a notch on the thrillometer was easy in the 2013 Mini Cooper S. Minis are always fun to drive and we always look forward to the chance with relish. This new model was no exception – a sheer blast to take about the track for three laps.

The interior is racing inspired so it felt right at home at HPR and its 181 hp 1.6-liter, aluminum alloy four-cylinder has twin scroll turbos tuned to provide an energizing jolt of low-end torque. What all that means is when you tell the Mini Cooper S to go it’s already halfway there.
Racing through the gears of the 6-speed manual Getrag transmission and screaming through the turns is what the track is all about. There were a lot of faster cars on the track, but few that were as much riotous fun.

This engendered my personal best speed of the day, managing to hit about 110-mph on the straight. Though the 370Z has paddle shifters, the Nissan rep agreed that modern automatic transmissions, especially on a car like this, are far more efficient and quicker than any human. They also are wired to protect the engine while getting the most out of it.

To outdo that speed on the High Plains Raceway takes an exotic sports or a big-engine musclecar and a top-rated driver. One member of RMAP exclaimed, “That car will give you religion,” pointing at the Audi R8 V10 he’d just driven. “The sound on the track is just phenomenal!”

Taking the last ride of the day at High Plains Raceway involved jumping into the passenger seat of the Audi R8 Spyder for the best three laps of the day. This RMDE participant was a first class track driver and surely hit 125-mph on the long stretches, taking corners at speeds I would not have thought possible.

Even though this was only the V8 engine available in the Audi supercar, this could easily be characterized as come-to-Jesus fast. That’s what my colleague was trying to get across – wicked speed.

The Audi R8 is a true racecar only slightly dressed for the street. It was a fitting way to cap off a morning of thrilling high speed driving experiences.

Coverage of the Colorado Off Road Extreme aspect of the Rocky Mountain Driving Experience is coming up next.

Aaron Turpen wrote on June 17, 2012 - 10:17pm Permalink
One of the greatest days I've had in recent memory was this day on the track and then offroad. This was my first time on a GT track, so it was a real learning experience, but I managed top speeds of 115 and 127 in some vehicles that, frankly, cost more than my house. :) I broke 100 miles per hour in nearly every vehicle I drove, though, with the exception of the CT-200h on its first go-round as it was in ECO mode. Turning that off, it performed beautifully.
Don Bain wrote on June 18, 2012 - 1:48am Permalink
You're absolutely right. I'm getting acclimated to track driving and consequently enjoying it more. I just ran out of time before I got to a lot of cars I'd like to have driven. Next year will be better for us all. We're getting savvy. Of course, young dogs pick up tricks quicker, but there's no truth to the saying the old ones can't learn them.
Aaron Turpen wrote on June 18, 2012 - 2:00am Permalink
lol True that.
Keith Griffin wrote on June 18, 2012 - 7:21am Permalink
Great point about the Kia Optima TGDI. I drove it at Palm Beach and that car just loved the track. The only problem was a lot of brake fade after it was run hot for a while! Sounds like a great day. And Sean Maynard paid for breakfast? He's usually better at bar tabs!