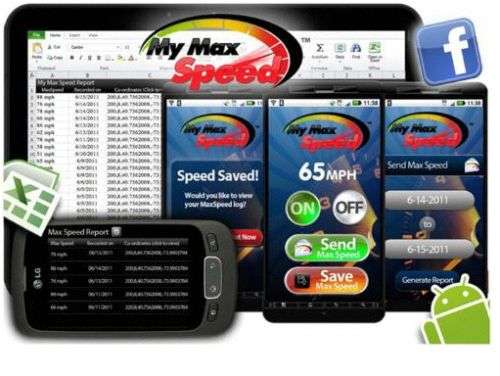 Pulled over for speeding? Get a second opinion!!!

A new Smartphone app is designed to protect your rights when dealing with police by recording your rate of speed every five seconds and storing the data in a spreadsheet compatible with Microsoft Excel. The My Max Speed app protects you from flawed police equipment or alleged infractions aimed at secondary violations like the failure to use a seatbelt.
Advertisement

The app logs a users rate of speed every 5 seconds as they travel. The info is useful in reviewing driving speeds and confirming compliance with legal limits. The data is exportable in batches or in 5-minute data snapshots, covering a specific incidence. Within the app, each speed listing can be opened to display the exact physical location in a map format.

"There are hundreds of reasons to run My Max Speed on your smartphone. We expect many will help protect drivers' rights while others will make the roads safer. For example, our children are more apt to drive slower, safer if they know there is a chance that I will be checking their speed reports," commented Wayne Irving, CEO of Iconosys.

Additionally, drivers pulled over for excessive speed can, with the app, confirm instantly their rate of speed was what the officer said. In some cases this could save hundreds of dollars if law enforcements’ speed detection equipment is not functioning properly.

In some cases, secondary offenses may be cited, meaning you were really pulled over for alleged violation of speed limits and cited for something else. This includes but is not limited to infractions like; seatbelts, proof of insurance and others. Being able to prove the initial premise for the stop did not occur can cause other secondary charges to be dropped.

The app features a large display of speed showing you your highest rate of speed in past five minutes of driving. It stores speed snapshots in five-minute segments for evidentiary purposes and can be easily exported to MS Excel, Word, Power Point or other software.

A New York officer notices a driver is traveling without a seatbelt but cannot stop the driver, as non-use of seatbelts is a secondary offense. The officer pulls the driver over anyway, giving out a ticket for speeding and the unbuckled seatbelt. However, My Max Speed has logged his maximum speed at that time. The driver goes to court showing proving he was driving under the legal limit and all charges are dropped.

In 2009, speeding was a factor in 30 percent of all fatal crashes and 12,628 lives were lost in speed-related crashes. NHTSA estimates the economic impact of speed-related crashes at $28 billion per year. Speeding is a deliberate behavior where the driver knows the risk but ignores the potential consequences. Fully 90 percent of all licensed drivers speed at some point in their driving career and 75 percent admit to committing this offense regularly.

My Max Speed is available for free in an ad-supported version, and for $4.99 in an ad-free version from the Android Market or inconosys.com.