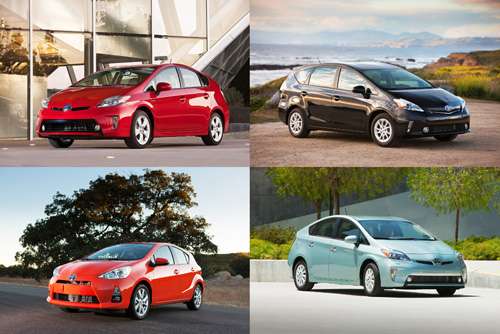 R.L Polk released data late last week confirming the Toyota Prius family of vehicles as the most popular nameplate among California drivers in 2012, based on new car registrations.
Advertisement

According to Polk’s count, the Prius Liftback, Prius v, Prius Plug-in, and Prius c total sales equaled 61,893 in 2012, dubbing the Prius as the top vehicle badge in the state, not to mention a clear market leader in the sub-compact segment.

Thanks to the state’s growing concern with automotive emissions, many Californians are deciding the hybrid technology that combines both gasoline and electric power is a smart move in the ever changing world we live in.

Toyota has sold over half the hybrid models on the road today, thanks to leadership in the field initiated by the visionary, but risky 1997 release of the Prius in Japan, followed by the worldwide debut during 2000.

Toyota is also delighted with the editors of Cleanmpg.com dismissing the claims made by Ford that the C-Max can out perform the Prius family in mileage.

They compared results for the two vehicles on a 365-mile-highway outing at a moderate speed set by cruise control. In the site’s study, the Prius v averaged 40.8 mpg, beating the EPA rating slightly. Along the same route and conditions, the Ford C-MAX got 35.5 mpg, well under the EPA rating of 47 mpg (by 24.4 percent.)

At the press introduction of the second-generation Prius Liftback in 2004, I took a test drive with an auto journalist who was an efficiency expert from Dallas. By hooking up his laptop, route planning and timing his drive to never stop; he managed to coax 67.7 mpg out of the hybrid in city driving.

In short, he drove the car as though playing a video game, something most of us won’t have the time or inclination to attempt.

Though spending a little time in the Prius v and Prius c models at similar press events, it has been some time since the opportunity to drive a Prius for more than an hour or so has presented itself.

Having always felt the Prius had a niche to fill and a purpose to serve, I’ve always been rather fond of the line and have known owners who are simply delighted with their own personal model. Found one that didn’t like his at all, but that was mostly about it not being big enough to accommodate his rather sizable frame.

Nevertheless, the discussion regarding the relative merit of the Prius line-up versus the C-Max is likely to continue.

Frankly, we think the competition will do both the brands a bit of good.

RonaldKramer wrote on March 12, 2013 - 11:10am Permalink
Open letter to Ford: I thought my 2013 C-MAX would be a Prius Killer? NOT! As a returning Ford buyer I feel deceived. I want to support US companies and US jobs. What was Ford thinking when they published 47/ 47/47 estimates? Based on the advertised EPA estimates, I would have been ok with low 40's but 28-33 mpg is not even in the ballpark. This is not an issue about EPA testing standards, but rather an issue about setting false customer expectations in order to promote sales. Ford's "47MPG" marketing campaign tarnished what should have been the roll out of a truly remarkable vehicle, the CMAX. Real world MPG estimates should have been promoted in the mid-30's. No one would have questioned those numbers and the CMAX would have received the accolades it deserves. How these MPG estimates made it through Ford corporate is beyond me! Maybe it was the rush to go to market? I have been accused of not knowing how to drive hybrid. For the record, during the last three years I have leased both a 2010 Prius and 2010 Honda Insight Hybrid, and consider myself an experienced hyper-miler. My mileage in the Prius is 50 plus, the Insight is 40 plus. The C-MAX is a well-built car, with extremely inflated EPA estimates. I respectfully request that this matter be investigated as soon as possible. My efforts to deal with this locally and through Ford customer service have frustrated me to no end. The constant response? "You need to learn to how to drive hybrid type of vehicle ". Is there a difference how I drive Prius Hybrid vs. the CMAX hybrid? I think we all know the answer to that. I need someone at Ford to reach out to me and assist in a proactive manner so we can put this matter to rest. I have opted not to join the class action lawsuit regarding this matter in order to explore my resolution options with Ford directly feeling this was the most honest approach to the matter. Can I expect the same from Ford in return? Respectfully submitted, Ronald Kramer Yankee Ford Customer South Portland, Maine PO Box 2517 South Portland, ME 04116