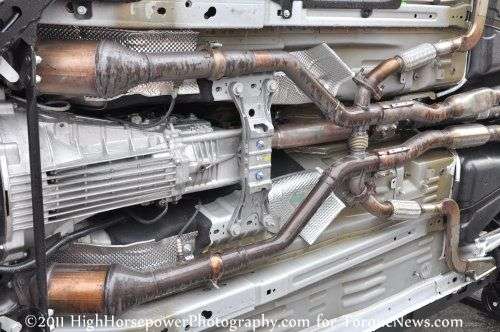 Catalytic converters use platinum as a catalyst and though there’s not a lot in one, it’s enough to attract those scurvy urban pirates now that the precious metal can fetch up to $1,800 an ounce. Police in Massachusetts are setting up surveillance operations to catch the stealthy saw-toting blackguards.
Advertisement

From a report in The Sun Chronicle in Attleboro MA, police have already arrested one Jeffrey M. Waterman after staking out a parking lot where a number of such thefts had occurred – a Turnpike Truck and Helping Hands of America on Route 1.

The 38-year old freebooter was captured after police watching the parking light noticed flashlight beams in and around cars in the lot. They formed a perimeter and slowly closed the net on the unsuspecting blighter.

The truck stop was just one of several location where such thefts have taken place by these scrofulous opportunists who, just like the unlicensed tow truck drivers, redeem the parts for cash at recycling centers.

What does a modern urban pirate look like? Waterman was wearing dark clothing, a knit hat and gloves, carried a flashlight and had numerous saw blades on him. Police also found a cordless cutting tool and a catalytic converter already removed from a vehicle.

“The theft of catalytic converters is a growing crime across the country because of the rising price of precious metals,” he said. "A lot of people are surprised by this crime, because they aren't hearing much about it in the media, but the threat is real, and it could cost you if you don't take precautions."

The thieves generally look for large trucks or SUVs in dark areas where they can slide under the vehicle surreptitiously. It only takes a few minutes to cut through the connecting pipes and be off with your part.

Police advise parking close to store entrances, in well lit and high traffic areas. That and obtaining an alarm system that will respond to the first stroke of a saw blade.

In Massachusetts, they’ve experience a rash of stolen manhole covers and catch basins – a trend that now seems to have focused on catalytic converters.

More disturbing, is the news the thieves are now targeting the largely unattended mass transit parking areas and striking in broad daylight.

Most people who use these lots, park in the early morning and return in the late afternoon with hardly anyone coming in or out in the meantime. All that is required is a space near their target and a few undisturbed minutes to grab their prize.

Should you return to your vehicle and find it missing its converter, we’re sure you’ll have something much more colorful to say than, “ARRGHH!!” But the pirates will be drinking their grog and laughing at how easily they cut the strings to your purse.

bill hicks wrote on March 14, 2015 - 7:03pm Permalink
yup heres a talented race car driver with a drug habit its ruined all his opportunities and now g=hes a thief way to go jeff