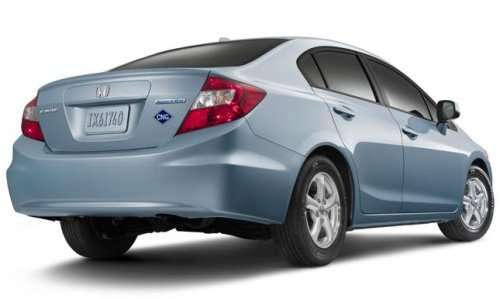 Four years ago it seemed a simple goal – one million electric vehicles on US roads by 2015, as the price of gas neared $5 a gallon. Today with only 65,500 EVs rubbing curb-feelers with 123,600 CNG vehicles and gas steady at about $3.50 a gallon, the focus seems misplaced.
Advertisement

Of course when the Obama Administration put up $5 billion to promote alternative EV technology, the price of natural gas had not yet dropped to roughly half that of gasoline today.

The numbers come from a post by Chicago Tribune reporter Julie Wernau, who implies the value of CNG is being drowned out by the buzz around electric vehicles. Instead it seems the EV is being undermined by the relative low cost of petrol and natural gas.

The numbers are also projections of the number of electric and natural gas vehicles will be on US roads by the Smart Transportation studies conducted by Pike Research.

"Hindsight is always 20-20," the report quotes Christopher Knittel, the William Barton Rogers Professor of Energy Economics at the Massachusetts Institute of Technology Sloan School of Management as stating. "The drop in natural gas prices brings up an interesting issue, which is which technology do we want to put our money behind?"

Both technologies suffer from the need for a delivery infrastructure, but like EVs, CNG vehicles can be fueled at home where natural gas is used with just a relatively inexpensive fueling line mounted in the garage.

"Natural gas vehicles just don't have the cost challenges that electric vehicles do. You don't need that same level of incentive," The Chicago Tribute quoted Dave Hurst, a senior research analyst at Pike Research, as stating. The firm specifically studies electric and natural gas vehicle markets. "I think the more interesting question is, why aren't there more incentives on the infrastructure side for natural gas?"

Even so, at this stage of the game, installation of charging stations is far outpacing the creation of CNG fueling stations. So the electric has the lead in that department, if only the cars weren’t so expensive.

Of course, DIY electric conversion kits are soon to be available, throwing the choice of electric vehicles wide open, as the costs head back down to earth.

Existing combustion engine cars can be converted to CNG as well, but the process is pretty intense for the do-it-yourself minded.

"In some ways it's pretty similar to the challenges we're seeing on the electric vehicle front," Hurst added. "Should infrastructure lead the vehicles, or should vehicles lead the infrastructure?"

So far, Honda is the only manufacturer with a factory produced CNG passenger vehicle; the Honda Civic NG is $5,650 more than the gas-powered Civic EX. Notably they are now in showrooms and available in all 50 states.

While the Federal tax credit does not currently apply to CNG vehicles, certain states provide their own incentives. Illinois offers buyers a $4,000 tax credit on the purchase of a CNG vehicle, virtually wiping out the extra cost of the natural gas model.

Part of the difference is proponents of CNG vehicles have focused more on fleet vehicles and EVs are better suited to daily commuter and passenger vehicles.

"Electric vehicles are more well-suited to the consumer market," Hurst concluded. "But when you start getting into these medium-duty and heavy-duty trucks, electric is never going to be a great solution for those. Such vehicles use a tremendous amount of fuel and (gain) just a couple of miles per gallon."

The final part of the equation is that the money saved on producing CNG vehicles, is spent building natural gas filling stations. The massive reinforced storage tanks they require, along with expensive compressors, cost from $0.5 to $1.5 million. A traditional gas station is only about $200,000 to $400,000 while the most exorbitant charging station is only $50,000.

Last February, Obama proposed extending the tax credit to $10,000 and opening it up to alternative technologies like CNG and fuel-cell vehicles.

So it doesn’t matter what you drive, there’s a lot of money wrapped up in building and fueling it. What it all comes down to is this – who gets all of this money and how are we going to spend it?

That, TN readers, is the chink in the drive train.

Aaron Turpen wrote on July 30, 2012 - 10:11pm Permalink
Blah blah, obligatory "natural gas comes from evil fracking" hoodey hoodey knee-jerk "it's still a FOSSIL fuel" yadda yadda "renewable." Figured I'd pre-empt the canned responses you're going to get.
Nicolas Zart wrote on July 30, 2012 - 10:48pm Permalink
I never understood why manufacturers never commercialized a hybrid CNG car, and then push it to a PHEV. Makes perfect sense.
Don Bain wrote on July 31, 2012 - 1:01am Permalink
You're psychic, dude, cause that just what I was thinking as I wrote this - When is someone going to design a plug-in hybrid with a range extending natural gas generator?
Aaron Turpen wrote on July 31, 2012 - 1:06am Permalink
I'm working on funding for one. It'll be a one-off, but still.. :)
Don Bain wrote on July 31, 2012 - 1:05am Permalink
Yes I know, but it burns “cleaner” right and the EVs are all powered by coal-burning power companies. It's all mixed up!
Anonymous wrote on August 20, 2012 - 7:56pm Permalink
Why invest in infrastructure where there is a finite supply? Politicians argue over "domestic oil" when until it is nationalized like Afghanistan and Venezuela, we really are selling this precious resource to the company that bought it and out of the country it goes. There is a place for our natural gas and I wish it were at home. Also people must think of EVs in terms of EREVs for at least a decade. For now, a Chevy Volt can be driven at the same price as a Toyota Camry or Honda Accord if driven 15,000 miles per year. By the time the 8 year warranty runs out there will be a plethora of battery technologies available that will change everything. Also, do not look only at what our government is doing but the global approach. Our largest competitor (China) has mandated 500,000 EVs by 2018 and 5,000,000 by 2020. I researched the Honda CNG as well as the home fueling station. I bought the Volt instead and am very pleased. I also added $3400 (after tax credits) of solar panels with a 25 year warranty that powers 90% the Volt miles. Basically that will pay for the energy to power 90% of the Volt's fuel, and the the next EV and the next with no increase in cost. Very pleased.
Aaron Turpen wrote on August 20, 2012 - 11:43pm Permalink
Here we go with "mandates" again. China can mandate whatever they'd like. They're aren't a FREE COUNTRY where people aren't (supposed to be) FORCED to buy things because some a-hole in government decided they should. The Chevy Volt doesn't compare to a Camry or Accord, by the way. Not even close. Both of those other cars seat 5, have twice the cargo space, and cost far less off the lot. I did a price comparison between the Volt and the Passat TDI and found that the two cars cost about the same over a normal lifespan of ownership, but you pay a LOT more up front for that Volt and give up a TON of versatility in the bargain.