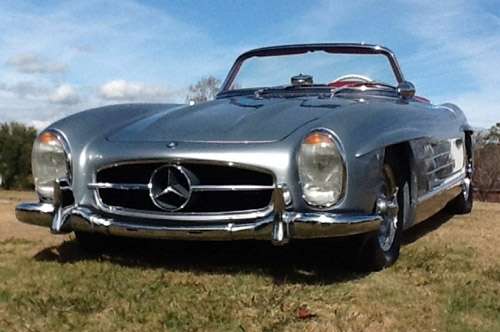 The Mercedes-Benz 300SL that the late, great Natalie Woods once painted bright pink, as if a 300SL with her in it wouldn't get enough attention in Hollywood, will compete at the 2012 Amelia Island Concours D’Elegance, meticulously restored to its pristine original condition.
Advertisement

"She had it painted pink," said Bill Warner, founder and Chairman of the Amelia Island Concours d'Elegance, "Pink with a lipstick red leather interior, as if driving a 300SL around Hollywood didn't attract enough attention."

The star bought the car in 1957 with the optional Rudge knock-off spinner wheels, not to be confused with modern day spinners. The pink color she painted went quite nicely with its red leather interior but was not a color offered by the manufacturer by any means. It certainly didn’t go unnoticed then nor is it likely to be now.

Natalie Wood performed in over 56 films for the screen and television, notably her nine-year old appearance in Miracle on 34th St. and other work in films such as West Side Story, The Searchers, Splendor in the Grass and The Great Race. She won three Academy Award Nominations before she was 25, but never the award. She did win several Golden Globes and other awards before her tragic drowning death in 1981.

A reexamination of evidence was ordered last year after Christopher Walken admitted having doubts about what happened to the star on her husband Robert Wagner’s boat, but now new evidence was found to overrule the original definition as accidental death.

The Mercedes-Benz 300SL lives on in silent tribute to the many lives and objet d’art she touched during her highly accomplished if somewhat abbreviated life.

To honor the anniversary of Mercedes-Benz first Le Mans win in 1952, Woods’ Mercedes-Benz 300SL will compete in the 300SL class at the Amelia Concours D’Elegance this week. It has been returned to the factory approved silver-blue color with every detail in the national award winning 300SL is true to original, including the period-correct Becker in-dash radio, ownership documents in the glove box and even the original style of hose clamps were restores bringing the classic German roadster to pristine showroom condition.

Other notable vehicles entered in the competition include those formerly belonging to Rita Hayworth, Ginger Rogers and silent-era cowboy Tom Mix.