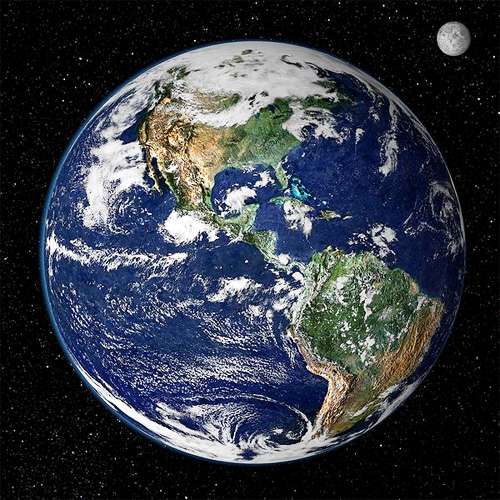 Last week, scientists reported the melting of the Greenland ice sheet has already "shattered the seasonal record" set in 2010, four weeks before the end of summer. According to authorities, the phenomenon is the result of rising Arctic temperatures, with serious consequences for the environment, coastal communities and arctic species.
Advertisement

Did you notice any coverage of this in any of the media you get your news from? Probably not, we found this information on the Media Matters website, not a site to be found on many bookmark tool bars.

The research was sponsored by NASA and the National Science Foundation and enabled Prof. Marco Tedesco’s examination of satellite data from the National Snow and Ice Data Center. He discovered Greenland has "experienced extreme melting in nearly every region" this year, concluding, "With more yet to come in August, this year's overall melting will fall way above the old records. That's a Goliath year - the greatest melt since satellite recording began in 1979."

It matters not whether global warming is unavoidable climatic change or a result of human behaviors. Obviously there are other sources putting CO2 into the atmosphere. The wildfires in the West poured tons of CO2 into the air by the hour. We can’t control this, but the droughts that have spawned these fires are due to global warming, which whether we caused it or not, we can affect it.

Whether we are to blame or not has nothing to do with what we can do about it. By that, we mean trying to leave an inhabitable planet to our great grandchildren. Is that such a misguided goal?

This is the reason for the raised CAFE requirements that so many groan about and bemoan, despite the potential benefit to us all, our planet and our progeny.

The film Hunger Games depicts a world in which the top two percent of society (who Romney would somehow fail to tax if you believe the inescapable ads on TV) create a capitalist aristocracy. They live in walled cities, secure in their prurient and superficial world, while the remainder of society suffers at meager subsistence levels. This is the very future the Occupy Wall Street movement sought to derail.

On the other hand, passenger cars and trucks only add up to 17 percent of the total manmade greenhouse emissions – the vehicles with a much greater impact are in corporate fleets. So while we can only do a little as drivers, we can do a lot as the stockholders in corporations, if we simply decide to do so.

Of course, most stock investors are interested in attaining additional wealth more than leaving a livable planet to those who will inherit their assets – despite the attempts of ancient Pharaohs, you still can’t take it with you.

As individuals we can learn to modify activities and use the devices of our lifestyles in a slightly more energy saving manner. We can try to minimize our contribution to the growing level of CO2 in our atmosphere – higher than at anytime in 2,000,000 years. Something a leaf paleontologist at the Denver Museum of Nature and Science told me in a matter-of-fact manner. His conclusion was based on his research with leaf fossils, which reveal atmospheric conditions when they were preserved.

As shareholders, we can demand the companies we invest in are as energy concerned as they are profit seeking, in both their facilities and their vehicles.

In the final analysis, coal, oil and natural gas are finite resources that will eventually be depleted. The sun, the wind and the ocean provide self-sustaining energy sources we must learn to use.

The alternative is to proceed on course until we ravage the Earth the way the pine beetle has decimated the forests of the West.

In mid-2007, Jeremy Grantham, founder of the $95 billion GMO firm, saw the economy as though he were “watching a very slow motion train wreck.” He said then, by October that “train hits end of track at full speed.”

He was a few months off, but the next year the Wall Street credit train derailed.

In an article titled 10 explosive bubbles that will kill capitalism by Paul B. Farrell, Grantham reportedly observed that despite the thousands of things it does better than all other systems, capitalism has three fatal flaws: the lack of a moral compass, a blind spot concerning resources and unquestioning faith in the myth of perpetual growth. He goes on to point out ten more social, cultural and economic events he expects to take down the capitalist machine and us along with it.

The responses to his article show some already think they are part of a corporate aristocracy. On a site called Downloadpolitics.com one San Antonio resident wrote in response to the article on MarketWatch.com:

“The REAL BIG PICTURE is that the Elite are the future. The little people don't matter much and will either die off or live on the edges,” rails the Texan posting as submitass. “Eventually the Elite will be a race of SuperBeings, who are genetically engineered and get to live in a HYPERTECH World we can't even imagine. They will have to reduce the numbers of Little People so we don't become a problem. Get over this idea that the WHOLE of Humanity has to move along on the same trajectory. Its all part of the evolutionary process.”

Didn’t he say, “So we don't become a problem?” In any case, he brings to mind another better known quote: “The meek shall inherit the Earth.” The question is will that happen before or after these self-appointed superbeings are done with it – and will even the meek want what is left?

Unchecked, the so-called elite will take us from a dog-eat-dog world to one where men eat dogs. Is that where you want to live?

It’s for the children of our children's children we strive – not our own aggrandizement. It’s a big lesson we should have learned by now.

Aaron Turpen wrote on August 27, 2012 - 12:50pm Permalink
All of this assumes that CO2 is a climate driver, but evidence says it's likely a climate follower, rising AFTER warming, not before. Even those climate scientists who promote man-made global warming admit that CO2 is a low-impact greenhouse gas. Simple physics say that the more CO2 you put in the atmosphere, the lower its per-cubic meter impact is. Which shatters the premise that CAFE or other reduction standards targeting CO2 will have any impact whatsoever on climate.
Don Bain wrote on August 27, 2012 - 4:51pm Permalink
Then why is it the last time the levels were so high carboniferous forests covered the globe. And by the way I did read your excellent analysis of CAFE, which as I recall had more to do with Randian capitalism than environmental issues. As this story implies, I don't expect CAFE to save the world, but I hope it will spark innovation, which is a good thing.
Aaron Turpen wrote on August 27, 2012 - 8:19pm Permalink
I talked about market forces and how CAFE forced automakers to concentrate on fuel economy at the expense of safety and consumer demands for performance. If I inserted "Randian capitalism" then it was as an illustration of the way it might have happened had government not intervened. CAFE was not about the environment and still isn't. It's stated purpose is to reduce the amount of oil we use - namely foreign oil imports. The current rhetoric is to throw in "green" issues to justify the mix, but that doesn't jibe with their literature and stated reasonings.
Don M. Bain wrote on August 27, 2012 - 1:11pm Permalink
Hard to understand the reason for some to "groan and bemoan" the increase in CAFE standards, when the consequences include spending less at the pump, increasing national security and inviting designers and engineers to unbridle their innovation creating transportation products we would be delighted to buy. The same applies to your request to solicit corporations to do the same. Reducing costs and increasing innovation increase shareholder value too. Thanks for the perspective. Please keep it up. Don Bain (Yes, I share the same name. I would be pleased if this article comes up when someone searches on the name.)
Don Bain wrote on August 27, 2012 - 1:21pm Permalink
Thanks for your reply. And given the surname, look up Bob “Telecaster” Bain sometime. There was a feature article on him in the May 2012 issue of Vintage Guitar magazine.
Aaron Turpen wrote on August 27, 2012 - 4:22pm Permalink
Read my series on the CAFE standard, Don, here on Torque News. First, automakers were already on the way towards meeting those goals anyway, well before the government decided to step in politically to take credit for it. Next, the standard has proven to be ineffective and often counterproductive. CAFE creates loopholes and political footballs and nothing more.