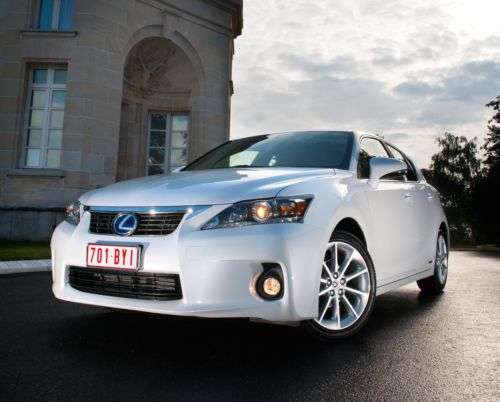 Lexus rolls out the CT200h with Darker Side of Green campaign

We are watching very curiously for the actual Lexus CT200h vehicles to hit the streets later this month. Lexus is buying television time to promote the $30K “Eurowagon” as the Darker Side of Green with ads that invite you to “Challenge Perceptions, Escape Convention and Forge Your Own Path.”
Advertisement

From the first impression of Lexus CT200h we like the remarkable 42-mpg fuel economy and the little car's looks, but can only wonder how much Lexus one can buy for $29,990.

“This campaign had to convey the CT’s uncompromising personality and reach both current Lexus owners and new consumers through bold and engaging initiatives that hit their passion points,” said Dave Nordstrom, vice president of marketing for Lexus. “The result is a campaign that reflects the car itself – it’s energetic, passionate and very dynamic.”

Lexus is embarking on one of the largest marketing campaigns in the brand’s history to launch this new vehicle. The multi-faceted campaign, which breaks today, features pioneering computer-generated imagery (CGI). Only the interior shots are real time video.

Our favorite of these shows tree-lined pedestrian promenades opening into tree-lined avenues as the car nears them. The city opens before you as you drive through in a scene seemingly inspired by the imaginative film Inception. Actor and best-selling author Hill Harper appears in the spot and provides the voiceover. He declares the CT to be, “Just what you need to forge your own path.”

The Lexus CT200h is quite unlike any vehicle they have previously produced, and keeping with that concept Lexus has engendered unique partnerships, including agreeing with YouTube to sponsor Girl Walks Into a Bar, the world’s first feature film developed for online distribution.

They have also joined forces with Microsoft in an entertainment series entitled, Fresh Perspectives. The documentary series focuses on six artists, each commissioned to create three original pieces in 24 hours, inspired by the themes of Enrich, Escape and Empower.

One would conclude Lexus in gambling big on the CT200h. Is the world ready for a lean, green, luxury hybrid machine? Could be, but when it comes right down to it, it all depends on you – the automotive buyer.