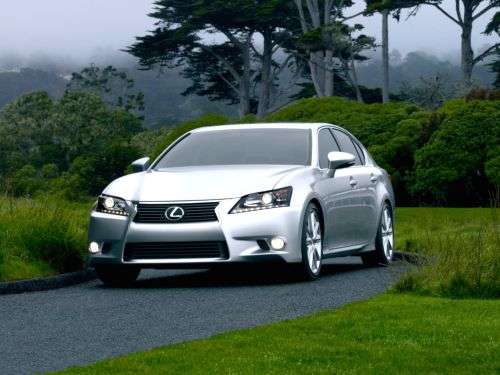 The new Lexus GS 350 has a new grille and design focus predicted the shape of things to come from the luxury brand that once characterized their mission as the passionate pursuit of perfection – though slogans change, those words still hit a chord that reverberates through the Lexus line-up.

After a brief introduction from Templin, Toyoda announced a new direction and management strategy taking aim at a more global marketplace.

“When consumers think about the pinnacle of luxury, we want them to think Lexus,” Toyoda said. “To accomplish that goal we are doing something very different, something we have never done before. In fact, Lexus is leading the way in how the entire Toyota Motor Corporation should operate.

“Simply put,” he continued, “We have internationalized Lexus. We hand picked a team from all over the world to head up a new Global Lexus Division at TMC and have combined engineering, design, and marketing all under one unit, separate from any other group.”

The new group of Lexus leaders are drawn from every major region in the world, and will be responsible for key decisions on the, business, marketing, and future products. In essence, they are a fully empowered advisory group, representing the voice of customers.

“Since I am so passionate about the future of Lexus, I wanted to be personally involved, Toyoda added. “So there are no extra layers. This new division reports directly to me and I have given them autonomy over business decisions. This allows the team to react quicker to customers’ needs and desires. This internal process is unique from any other division at TMC and I am very pleased with this new direction.”

Toyoda means it when he says he will be personally involved. “My role as a team member is to make sure our cars ignite a passion and create an emotional response.”

We are reasonably certain they have accomplished this goal in the 2013 Lexus GS 350. From its new grille exudes the aggressive visage of a Mako shark, surveying its surroundings for what it can catch and pass right by – with the imperceptible glee of an impartial predator.

“Today, buyers in the mid-size luxury segment want a more engaging driving experience, styling that makes a statement, and a roomier interior package,” said Mark Templin, Lexus group vice president and general manager. “With the all-new GS, we’re giving them what they asked for, and more.”

In the new GS 350, Lexus wanted both strength and agility so they drew upon the Lexus LFA supercar for inspiration, carrying over key elements for a more engaging driving experience. The body is more aerodynamic and rides on a completely new platform, featuring a wider stance and more rigid structure. The transmission reportedly delivers quicker shifts and – remembering our experience with the 2012 IS-F last December – we’ll take them at their word. Like the IS-F, the 2013 Lexus GS 350 emits a distinctive engine sound and exhaust tonalities – an engine that literally sings to you.

The 2013 Lexus GS 350 features a 3.5-liter V6, four cams/four valves per cylinder, with dual Variable Valve Timing with intelligence (VVT-i). Producing 306 horsepower, it is one of the most powerful base engines in its market segment and the only one with both port and direct injection. It gives the sedan a 5.7-second time for zero to 60 mph while simultaneously delivering improved fuel economy.

The transmission incorporates many features of the aforementioned Lexus IS-F. These include startlingly quick shifts, earlier torque converter lockup and downshift throttle blips — to support four driving modes operated by the new Lexus Drive Mode selector. There’s ECO for economy, Sport for a dose of exhilaration and Sport S if you want to add adrenalin to the mix.

The normal mode is there if you want to drive Aunt May to the mall without giving the poor girl a heart attack.

An electronically controlled all-wheel-drive system that enhances traction in a variety of driving conditions is optional. It can vary front-to-rear torque balance from 50/50 to 30/70, depending on ambient conditions, thus providing exceptional stability and traction.

There are a lot more new aspects and technology in the new 2013 Lexus GS 350, but we’ll save that for when we actually get to drive one – and we hope that’s soon.