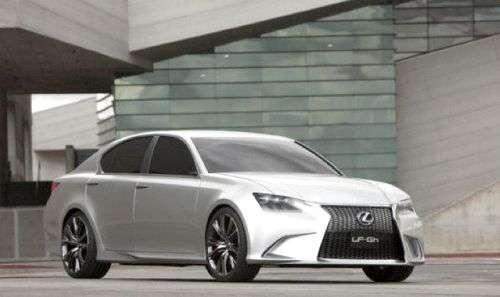 Featuring a fresh new spindle-shaped grille and foreshadowing the Lexus models to come, the Lexus LF-Gh concept car will make its global debut at the 2011 New York International Auto Show (NYIAS). This model may create the benchmark for the next level of the luxury touring sedan.
Advertisement

“For this concept, Lexus designers studied characteristics that are often considered contradictory and difficult to execute together,” said Kengo Matsumoto, general manager, Lexus Design Division, Toyota Motor Corporation. “The captivating design of the LF-Gh concept examines the possibility of balancing what are normally opposing qualities, such as style and functionality.”

How should a grand touring sedan look, standing still or in breathtaking motion, 10 or 20 years from now and what aspects of design would convey an extraordinary combination of virtues? The design developed blends both hard and soft elements with energetic and soothing sensitivity.

This exercise is the essence of L-Finesse, the Lexus design philosophy since 2001, and has resulted in the LF-Gh concept car containing innovations sure to migrate into future Lexus vehicles around the world.

“Customers have been waiting for a bold concept like this from Lexus,” said Mark Templin, Lexus Division group vice president and general manager. “We look forward to their feedback and integrating some of these exciting design features into future Lexus vehicles.”

The Grand Touring Tradition
The LF-Gh is intended to be a high-performance vehicle providing a deeply moving operational experience while transporting multiple occupants at high speeds over long-distances. It combines a striking ambience with fully functional attributes, enhanced creature comforts plus the luggage space needed for extended travel.

“Even while maintaining serene passenger comfort, it is a car designed to inspire and captivate the driver as hours behind the wheel accumulate,” sweetly croons the marquee’s release.

The spindle-shaped grille creates a resolute visage, but also contributes to radiator and brake duct function – an essential element in achieving excellent aerodynamic performance. Every line in the LF-Gh combines form and function.

For example, air flows in through front inlets next to the LED fog lamps and exits through similar outlets in the curve of the tail lamps on the rear quarter panel. The concept also minimizes traditional features like side mirrors and door handles to improve aerodynamics.

Within the dark tinted glass, an all-new Lexus interior-to-come is evident, a meticulous re-examination of every detail, with the aim of creating a fully driver-oriented interior.

The dashboard features easy-to-read gauges which compliment an intuitively operable console. A new three-dimensional analog clock, an exclusive timepiece suitable to a premium brand, is the central focus of the interior. The Lexus LF- Gh is designed for the needs of customers who know quality and are particular about the details.

All this and the immensely satisfying Lexus Hybrid drive system too. At this point all we can do is end with a quote from the comedy group Firesign Theater:
“You’ve been talking enough – hand it over. I’ll take two!”