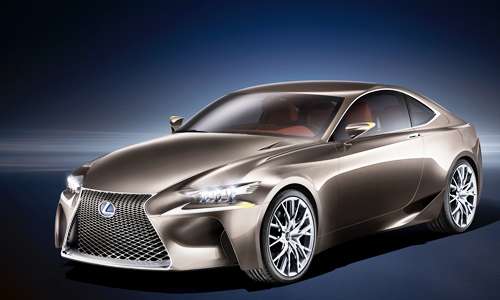 If you want a glimpse inside the minds driving the Lexus L-Finesse design evolution, the LF-CC debut in Paris drops a number of clues.
Advertisement

It is a gorgeous, if not entirely street ready, conceptual coupe whose main purpose is to make a dramatic statement. Based on the appearance created by the oversized spindle grille and massive air intakes characterizing the LF-CC’s front end, that statement is something to the effect it will suck up everything in its path.

It’s probably referring to its competition in Europe.

It follows the LF-LC premiere at NAIAS and in Geneva with its own world premiere during the Paris Motor Show. It is appropriate it should appear there. It hints that, at least in terms of design, Lexus is rapidly catching up with BMW and perhaps has already passed Mercedes-Benz – though such is not the case in a sales sense.

Part of that possibility results from an all-new drive train the brand says will make its way into production cars during 2014.

The LF-CC concept sports a highly efficient, 2.5-liter full-hybrid powertrain intended to combine the gripping performance of a sporty, D-segment coupe while lowering CO2 emissions and setting a benchmark of over 2 hp produced per gram of CO2 released.

Then Lexus wired a generator, a high-performance battery and a power splitter into the system that, by means of planetary reduction gears, conducts a symphonic orchestration of power between the movements of the engine, electric motor and generator to calm the heart of the savage beast behind the wheel (speaking for myself, of course). Next they added a compact power control unit to allow the interaction of the system components at high speed – brilliant!

Inside, you get a glimpse into the design minds behind the brand’s Human Machine Interface approach to ergonomics. It hints at the evolution of luxury in the Lexus of the future and represents a further development of the company's design philosophy.

The dashboard has an upper Display Zone with a split-screen display located for easy at-a-glance viewing, plus a lower, Operation Zone where one finds the unique shift lever and innovative touch tracer display for additional controls.

The distinct division of zones is intended to create a fusion between an airy, open cabin and a sporty cockpit resulting in a snug, focused driver envelope. All functional driving components have been consolidated into the area around the driver, combining the latest ergonomics with the advanced Lexus HMI approach.

Coordinating with the outer color, the seats, door panels and instrument hood are trimmed in an elegant amber leather finish. Extensive use of metallic finishes and soft touch materials throughout, reminds occupants they are in a Lexus.

Exterior features include a sexy new pair of uncovered LED-projector headlamp threesomes, complimented by daytime running lights incorporated into the upper surface of the bumper.

Viewed in profile, the hood curves back to a steeply raked windshield, continuing over a roofline that peaks where the rear edge of the door meets the top.

The rear-wheel drive coupe has fenders less pronounced in the rear than the front, adding to vehicle weight on the drive wheels and maximizing traction.

Taking design tips from the LF-LC concept and the LFA supercar, an integrated airflow-regulating scoop directs wind from beneath the car over the rear wheel arch, again increasing downforce over the drive wheels and further improving traction.

In the rear, the bumper flows into the rear wheel arches enhancing the LF-CC's widened stance. Characteristic L-shaped lamps sport layered, protruding elements while the concave bumper and rear deck incorporate an airfoil, again assisting with traction. The upper stop lamp is cleverly integrated into the shark fin antenna.

With its Fluid Titanium exterior hue, a metallic finish with exceptionally high brilliance, one would only need a little extra electronics, a small town Main Street, a whacky professor and a driver named McFly to get back to the future and see where this L-Finesse progression will lead.

All we can say is we like where it’s leading.